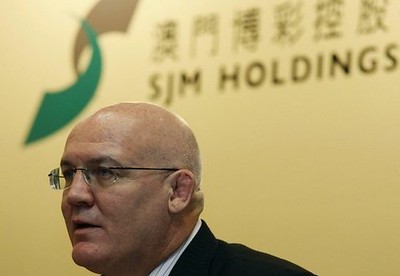 Industry veteran Frank McFadden (l.) has been named COO of the parent company of Macau casino concessionaire SJM Holdings. It’s a job he’s held before, without the title, and his return comes at a critical time for the operator that once dominated the world’s largest gaming market.

Longtime SJM Holdings executive Frank McFadden has been named the company’s chief operating officer in a move that restores the highly regarded gaming veteran to day-to-day oversight of the company’s US$4 billion-plus casino business in Macau.

McFadden’s appointment comes at a watershed moment in the gaming empire founded by Hong Kong tycoon Stanley Ho, who died May 26 at the age of 98. It’s also fueled talk of a widening rift within the board room among factions of the Ho clan, who may be divided about the company’s direction at a crucial time.

First, obviously, there’s the pandemic, which has gutted Macau’s world-leading casino revenues as SJM’s once-dominant share of the market is steadily shrinking. In the face of these headwinds, the most expensive investment in the company’s history, Grand Lisboa Palace, is slated to debut on Cotai later this year, after repeated delays. Farther out on the horizon—though not that much farther—there’s the expiration of the company’s gaming concession, along with those of its five competitors.

“These are the three exciting challenges we face,” McFadden recently told Inside Asian Gaming magazine.

Officially, his portfolio is in hospitality services, gaming analytics and property planning and enhancement for the 20-casino group, focusing principally on the company’s self-operated casinos, the Grand Lisboa, Casino Lisboa and the Oceanus at Jai Alai, along with the Ponte 16, in which SJM owns 51 percent.

Unofficially, he’ll be hard at it to ensure the opening of Grand Lisboa Palace, the company’s first Cotai property, goes as smoothly and successfully as possible.

As for whatever family drama may be in the works, clearly, McFadden will have plenty to do without getting caught up in it. “Experience, reputation, integrity and complete objectivity”𑁋these are the qualifications he said he brings to the table.

Clearly, the board of directors recognizes the company’s need for all four.

Prior to being named COO, McFadden had been more or less relegated to the operational sidelines as president of SJM’s International Business Development division. At 63, reportedly he was looking to retire. He took the promotion out of a “sense of duty,” he told IAG.

It isn’t surprising, given his long tenure with SJM and the friendship he enjoyed with Stanley Ho. He joined the company in 2006 during the development of Ho’s flagship casino hotel, the Grand Lisboa, after two years helping launch Sands China.

The man he replaced, Louis Ng, goes back even further. Like CEO Ambrose So, Ng’s association with Ho dates to the 1970s, when Ho held a monopoly on gaming during the last decades of Portuguese rule through his Hong Kong-based Sociedade de Turismo e Diversões de Macau.

Ng was appointed COO in 2002, when Ho greeted the post-monopoly era with the creation of a new casino operating company, Sociedade de Jogos de Macau. Out of this grew SJM Holdings. In need of a public company to finance growth, Ho listed the company on the Hong Kong Stock Exchange as SJM’s parent, with STDM as majority shareholder.

As corporate reshufflings go, the one that led to Ng’s departure𑁋he remains a non-executive director and advisor𑁋“does not seem as dramatic as some market participants had expected,” noted a trio of JP Morgan gaming analysts. “It could (still) be seen as an incremental step toward organizational change.”

If so, Ng’s reported ties to So and co-chair and Managing Director Angela Leong, the last of Ho’s four wives, could signal bigger maneuverings afoot.

On the other hand, the principal players are well dug in to their respective shares of the expansive turf Ho left behind. He was forced to withdraw from effective control of his Hong Kong-Macau business empire after a stroke in 2009.

When he died last month in Hong Kong, his daughter Pansy Ho, eldest of the five children he fathered with his second wife, had long been in control of his principal company, Shun Tak Holdings. Through Shun Tak, she’s exercised a sizable influence over STDM, and through STDM an indirect controlling stake in SJM. Pansy Ho has since solidified her position at STDM via an alliance with the heirs of Stanley Ho’s partner Henry Fok. Together they own 53 percent of the company. Fok’s son Timothy is co-chair of SJM. Pansy’s younger sister Daisy Ho is chairwoman and Shun Tak’s CFO.

Leong is a redoubtable businesswoman in her own right and a billionaire several times over. She owns 8.5 percent of SJM Holdings, another 10 percent of the casino operating company, and 6.8 percent of STDM. And with her extensive political connections in mainland China and Macau, where she’s a member of a legislative assembly, it may be of little value to the Ho family, and very risky, to challenge her outright, especially with the gaming concessions up for renewal in two years.

SJM’s annual meeting last Tuesday seemed to bear this out. Leong, Daisy Ho, Fok and Ambrose So all were re-elected. Leong’s eldest son, 27-year-old Arnaldo Ho, an assistant to Ambrose So and a member of SJM’s board, was named to replace McFadden as head of international business development.

In the meantime, Pansy Ho’s more direct interests in Macau rest not with SJM but with MGM China. She’s co-chair and a 22.5 percent shareholder in the publicly listed operator, which owns a casino on the Macau peninsula and a new resort on Cotai. She recently engineered an overhaul of upper management, assumed the title of managing director, and informed the staff that she intends to be hands-on going forward.

Some believe that Pansy’s role with MGM China will be to help the company secure a renewal of the gaming concession, but her ultimate goal is to lead and revive SJM.

“We expect Pansy to jump back to SJM,” said Ben Lee, the leader of Macau consultancy, iGamiX.

In light of all this, McFadden’s return to direct control over operations at SJM would seem to have little to do with politics and everything to do with a recognition by all parties that the casinos need new leadership.

In 2011, the company held 29 percent of the Macau market. Last year, it held 14 percent. And it depends for roughly half its annual gaming revenues on the 16 “satellite” casinos it leases to third-party operators.

McFadden himself has no doubts about where he fits. “My mandate is for change,” he told IAG. “This will be a positive for SJM.”

Lee agrees. “It is good for the company, that is for sure.”

Meanwhile, more Ho family drama broke out last week when sister Deborah Ho filed a caveat demanding that her lawyers be notified before the Probate Registry of the High Court in Hong Kong seals the official grant, which would name the administrator who would oversee the estate.

The move immediately set the rest of the family against her. Older sister Angela Ho released a statement saying that the family does not support the motion, and called it. “completely irresponsible and inappropriate.”