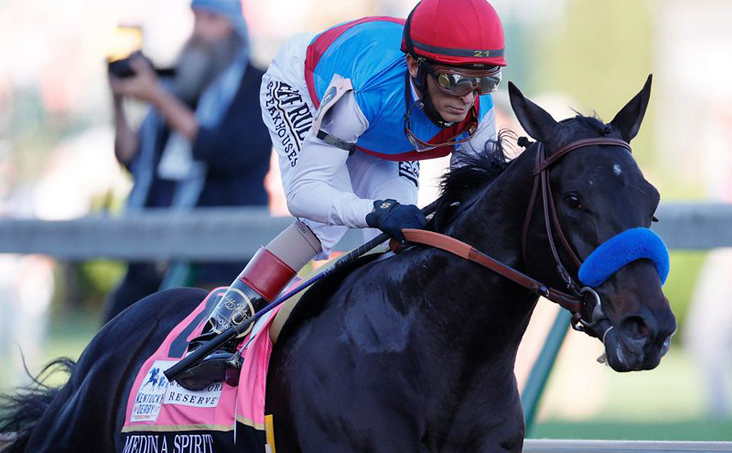 Hall of Fame trainer Bob Baffert won’t be in Baltimore for Saturday’s 146th Preakness. But three of his horses will be, including Medina Spirit, who won the Kentucky Derby—maybe.

Bob Baffert understands he’s the face of horse racing. With his white hair, shades, and friendly-to-all demeanor, he’s the biggest name in a sport that remains insular, clubby and often excluding of outsiders.

But the Hall of Fame trainer won’t be in Baltimore for Saturday’s 146th Preakness Stakes. Because he doesn’t want to be a distraction.

It’s true. Baffert would be a distraction since his plucky Kentucky Derby winner, Medina Spirit, tested positive for an anti-inflammatory medication.

The trainer called an impromptu press conference at his Churchill Downs barn Sunday. There, he announced that Medina Spirit’s post-Derby urinalysis revealed 21 picograms of betamethasone, a corticosteroid given to horses to relieve pain and inflammation.

Let’s be clear. Betamethasone isn’t banned in Kentucky. It’s not a performance-enhancing medication. And to put the amount in perspective, one picogram equals one-trillionth of a gram. Regardless, it must be out of a horse’s system within two weeks of race day. 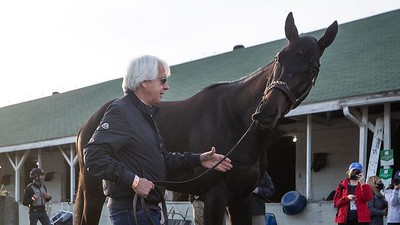 On learning of the positive test, Baffert (l.) went on the offensive. He insisted to reporters that nobody in his barn or on his veterinary staff administered betamethasone to Medina Spirit. His attorney Craig Robertson worked out an agreement with the Maryland Jockey Club (MJC) that will let Medina Spirit run the Preakness.

The deal comes with strings attached. A statement from the MJC Tuesday said all three of Baffert’s Preakness weekend horses—Medina Spirit, Concert Tour, and Black-Eyed Susan Stakes entry Beautiful Gift—will undergo “rigorous conditions for entry, along with a binding commitment from Bob Baffert to full transparency of medical and testing results.”

First, the conditions will include blood testing, monitoring, and medical-record reviews by the MJC on all three horses. Each was tested on arrival at Pimlico Tuesday morning, and each will have further blood samples drawn, and tested by an independent lab chosen by the MJC.

Baffert originally maintained that he didn’t administer betamethasone to Medina Spirit. But on Tuesday, he issued a statement saying the source of the anti-inflammatory could be an ointment applied to Medina Spirit for dermatitis. Baffert said the horse was treated for the ailment on a vet’s recommendation after finishing second to Rock Your World in the April 3 Santa Anita Derby.

“Yesterday, I was informed that one of the substances in Otomax is betamethasone,” Baffert’s statement read. “While we do not know definitively that this was the source of the alleged 21 picograms found in Medina Spirit’s post-race blood sample, and our investigation is continuing, I have been told by equine pharmacology experts that this could explain the test results. As such, I wanted to be forthright about this fact as soon as I learned of this information.”

Grab the Preakness Stakes Money Bet-Back at TwinSpires.com! Get your money back if your horse runs second or third in any race at Pimlico, through May 15.

Since then, Baffert has been his usual outgoing self. He launched a charm and media offensive that included ESPN “SportsCenter,” Dan Patrick’s radio show, and Fox News, where he explained his side of the story.

“I got the biggest gut-punch in racing for something I didn’t do,” Baffert said. “And it’s disturbing. It’s an injustice to the horse. … I feel like I was wronged. We’re going to do our own investigation. We’re going to be transparent with the racing commission, like we’ve always been.”

Meanwhile, Churchill Downs issued a statement making it clear what will happen if Medina Spirit’s split sample, the ‘B’ sample, comes back positive.

“If the findings are upheld, Medina Spirit’s results in the Kentucky Derby will be invalidated, and Mandaloun will be declared the winner,” the statement read. “Failure to comply with the rules and medication protocols jeopardizes the safety of the horses and jockey, the integrity of our sport, and the reputation of the Kentucky Derby and all who participate. Churchill Downs will not tolerate it.”

Churchill Downs also suspended Baffert from entering horses at Churchill Downs. It said it “will await the conclusion of the Kentucky Horse Racing Commission’s (KHRC) investigation before taking further steps.”

In 1968, Dancer’s Image tested positive for phenylbutazone. He was disqualified, and Forward Pass moved up to become the winner. Peter Fuller, Dancer’s Image’s owner, vehemently protested the decision, saying his vets gave the medication to the horse a week before the 1968 Derby. Fuller spent three years fighting the decision, but eventually gave up.

But back to Baffert. For him, Churchill Downs’ suspension is more symbolic, because he doesn’t send many horses to the track. But given his recent history with medication violations—and the sport’s battles with PR malaprops, ranging from medication misadventures to equine deaths—Churchill Downs has no choice here. Fail to act, and it will invite a PR disaster. Frankly, this sport can’t handle any more.

Keep in mind, this is Baffert’s fifth medication violation since May 2020. At that time, his powerhouse tandem of Charlatan and Gamine both tested positive for lidocaine after their winning efforts on an Oaklawn Park card. Both horses were disqualified after split samples came back positive for excessive amounts of the painkiller. But last month, Baffert won an appeals case with the Arkansas Racing Commission (ARC), saying the lidocaine exposure was accidental. As a result, both Charlatan and Gamine had their victories reinstated.

This isn’t Baffert’s first experience with betamethasone, or Gamine’s. The Champion Female Sprinter of 2020 finished third in last year’s Kentucky Oaks. But she disqualified to last after that drug was found in her system. The KHRC fined Baffert $1,500. Two months earlier, Merneith, another Baffert filly, tested positive for dextrorphan after her runner-up finish in a Del Mar allowance race. That brought a $2,500 fine.

“I’m not a conspiracy theorist. I know everyone is not out to get me, but there’s definitely something wrong,” Baffert said. “You know, there’s problems in racing, but it’s not Bob Baffert. … The last thing I want to do is something that would jeopardize the greatest two minutes in sports.”

In addition, Mandaloun trainer Brad Cox won’t be at the Preakness. And even if his horse is crowned Kentucky Derby champ, the bettors who hold tickets at 26/1—or more, in the case of futures bettors—remain out of luck.

Here are the latest line odds for the Preakness Stakes:

With Diaz Out, UFC 2