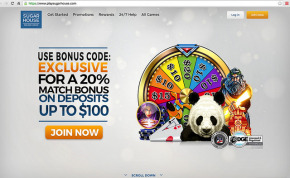 The Divine Fortune Slot at PlaySugrahouse.com—the New Jersey online site run by Philadelphia’s Sugar House Casino—seems to be red hot as a New Jersey woman hit a progressive jackpot of $61,000.

That’s a nice payday, but hardly a record for the state. Still, it’s notable that the exact same slot game hit the same progressive Mega Jackpot for another player who was taking their first spin on a slot machine at the site just last week. That payout was $194,000.

The player, Anibal Lopes, a 33-year-old superintendent for a construction company, is the biggest winner at the site since playsugarhouse.com entered the iGaming market in NJ in September 2016.

“We are very happy for this latest winner that comes just one week after we had our biggest jackpot win since launching playsugarhouse.com a year and a half ago,” said Richard Schwartz, President of Rush Street Interactive, the sites operator said in a press release. “This is good for us and for the entire online gaming industry, showing that it is possible to win life-changing amounts online.”