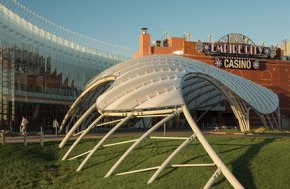 MGM Resorts International has bolstered its growing presence in East Coast gaming with the acquisition of Empire City Casino in Yonkers, N.Y.

The combined cash and stock purchase, which will give the Las Vegas-based gaming giant four major casinos in the Mid-Atlantic and New England states when it’s completed next year, is being pursued as a joint venture with the company’s real estate investment trust, MGM Growth Properties.

And it leaves no doubt that MGM intends to be a leading competitor for all sectors of a greater New York City gambling market numbering some 16 million potential customers.

The state could generate as much as $1.2 billion in sports betting revenue annually if the tax rate were below 10 percent and gamblers had access to mobile as well as brick-and-mortar locations, according to a 2017 report by Oxford Economics.

The Senate is considering a comprehensive measure to put the industry in operation, and a companion bill is expected to be introduced in the Assembly, but doubts have been expressed by Governor Andrew Cuomo and others that a deal can be done before lawmakers adjourn the end of this month.

MGM is paying $850 million, $260 million of it in stock, for Empire City and the adjoining Yonkers Raceway. Located just 15 miles from Times Square, the casino portion houses 5,200 slot and electronic table game positions and posted $70 million in EBITDA on $230 million in revenue in the 12 months ended March 31. No live tables are permitted at his property or at Resorts World New York City at Aqueduct racetrack, a facility that MGM once targeted for development but eventually turned down.

MGM will sell Empire City to MGM Growth for $625 million and lease it back for $50 million a year. The balance of $225 million pencils out to 11.5 times adjusted earnings, a steep price for a property with no hotel and little by way of non-gaming attractions, according to some on Wall Street, although MGM says that will drop to more like six times when cost synergies and new growth opportunities are factored in.

Those opportunities aren’t limited to sports betting either. As analysts point out, there is little overlap with MGM’s current customer base, which increases the potential to market Empire City players to the company’s other resorts on the East Coast and on the Las Vegas Strip.

It also positions MGM to cash in on New York City’s lucrative Asian market if Empire City receives permission to host live table games. MGM tried to buy into that market a year ago with a $1.3 billion stab at Sands Bethlehem that failed to come off and has agreed to add $50 million to Empire City’s purchase price if tables games are approved there in the next four years. Sands Bethlehem was recently sold to Wind Creek Hospitality, the gaming development are of Alabama’s Poarch Band of Creek Indians.

“This property essentially gives you that population base that’s coming from New York City and gives you access to those people,” said Colin Mansfield, a gaming, lodging and leisure analyst with Fitch Ratings.

It was with one eye on the Asian market that MGM last year proposed a $675 million casino on the waterfront in Bridgeport, Conn., at the same time it was developing a $960 million resort casino slated to open later this summer in nearby Springfield, Mass.

“We believe that there is significant unmet demand in the region, which is why we’ve been enhancing our presence in the Northeast,” MGM spokeswoman Debra DeShong. “We will be opening a resort in Springfield, Mass., have been advocating for a process that would allow for a competitive process in Connecticut, and now we’ve invested in Yonkers. We’ve long believed this is an underserved area.”