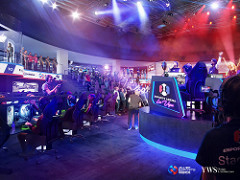 Las Vegas’ drive to become a national eSports hub has taken another leap forward with the announcement that MGM Resorts International is partnering with eSports developer Unikrn to bring a slate of real-money tournaments to Level Up at MGM Grand Hotel & Casino.

Rahul Sood, chief executive of Unikrn, a Seattle-based leader in the development of eSports experiences and related wagering platforms, characterized the joint venture as “thrilling”.

“There’s never been a partnership quite like this fusion, and we’re pumped to be in the center of it,” he said. “Traditional entertainment destinations have a lot of room to grow in appealing to eSports and gaming fans, and MGM Resorts International is leading the way.”

The joint venture is tailor-made for Level Up, an innovative lounge-like space that debuted at MGM Grand in December 2016, offering bi-weekly eSports competitions and other skill-based and interactive competitions in addition to a variety of traditional arcade games.

“With our commitment to the future of eSports and increased focus on enhancing our guests’ entertainment experience, we know Unikrn will be a tremendous partner,” said Lovell Walker, executive director of interactive gaming development for MGM Resorts.

The news follows on the announcement earlier this year that 2018 will see the arrival of the Strip’s first dedicated eSports stadium―again courtesy of MGM.

Taking part of its inspiration from the 15,000-square-foot Millennial Esports arena at the Neonopolis on Fremont Street, Esports Arena Las Vegas, a joint venture with Allied Esports, one of the sector’s global giants, will take over the space at Luxor Hotel & Casino formerly occupied by LAX nightclub. Plans call for a multilevel arena spread across 30,000 square feet and featuring a competition stage, LED video wall, special telescopic seating, state-of-the-art streaming at an array of gaming stations and television-quality productions studios. A unique gamer-focused F&B offering with a $9 million construction budget also is planned under the direction of celebrity chef José Andrés, a well-known presence on the Strip dining scene with three locations at The Cosmopolitan and one at SLS Las Vegas.

MGM is making its mark on the eSports in other ways, too, recently investing in gaming studio startup Foundry IV, the brainchild of Tobias Sherman, former global head of eSports at WME | IMG.

The University of Nevada, Las Vegas, is expanding its reach into the sector as well after planting its flag earlier this year by becoming the first major U.S. university to offer an academic course and supporting lab focused on eSports. UNLV is inviting its fellow Mountain West schools to participate in competitive exhibitions when the conference brings its men’s and women’s basketball tournaments to Las Vegas in March.

“They would be played in the Thomas & Mack Center or the Cox Pavilion, with the games shown on the (scoreboard) screens,” said UNLV President Len Jessup. “We’re not sure, but there could be one event or maybe a few rounds in between the basketball games.”

If the event proves a success, the conference might consider taking a page from the NBA and NHL and launch an eSports collegiate league, Jessup said.

“It’s definitely heading in that direction. Several of the Big Ten schools are doing that, and Cal and Utah in the Pac-12 are doing that. I think you’re going to see university-based teams and conference matchups and maybe an even bigger, national matchup.”

Unikrn’s deal at MGM Grand calls for regular weekend tournaments beginning in 2018 with prizes that include cash awards and the company’s UnikoinGold digital currency.

There are no immediate plans for direct wagering on the competitions, according to news reports, but Unikoin would have value in facilitating that because it’s convertible to other virtual currencies, such as Ethereum and Bitcoin, which, in turn, can be exchanged for real money.