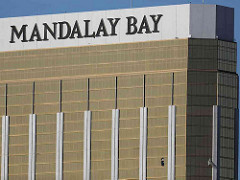 MGM Resorts International is looking to reach out-of-court settlements with the victims of the 2017 mass shooting on the Las Vegas Strip.

A U.S. District Court judge approved a request from MGM and attorneys for several of the plaintiffs suing the gaming giant to postpone a hearing in the case in Los Angeles this week while the two sides enter negotiations.

“While we continue to believe ultimately courts would find in MGM’s favor, we hope that entering into mediation will allow the parties to work together toward a fair and timely resolution,” a company spokeswoman said.

The two sides will make the same requests in federal courts in Nevada, California and five other states where MGM had sued victims to try to block potential claims over the shooting, the worst in U.S. history.

The company had sought by suing to consolidate 13 of the lawsuits in one federal court in hopes of taking advantage of a 2002 federal law written to protect businesses under certain circumstances from liability in the event of a terrorist attack. A federal court panel denied MGM’s bid, however.

As it stands, MGM is facing a mountain of lawsuits in courts nationwide from victims who claim the company failed to take reasonable measures to prevent Mesquite, Nevada, resident Stephen Paddock from stockpiling an arsenal of automatic and semi-automatic weapons in a suite in Mandalay Bay which overlooked an outdoor music festival on the Strip. On the night of Oct. 1, 2017, Paddock used the weapons to fire on the festival. In the massacre that ensued, 58 people were killed and more than 500 were wounded and injured. Paddock killed himself in the suite as police closed in.