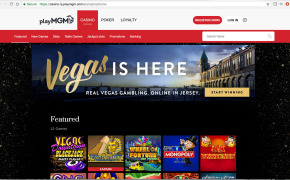 There’s another new online casino site in New Jersey and this one bears the name of MGM Resorts International.

The playMGM brand is also active in Nevada through a sports betting app.

The New Jersey site is powered by GVC, which provides the software for the company’s Borgata branded sites. The new site is available through pc browsers as well as apps for iOS and Android.

The site has launched with casino games and slots, but also includes an online poker room which will share players with Borgatapoker.com and PartyPoker.

The site is also launching with an impressive 100 percent deposit match up to $2,000 on first deposits. The site carries a rewards program linked to the Borgata, but is not connected to MGM’s Mlife rewards program for its land-based casinos, according to a report at onlinepokerreport.com.

Borgata’s online sites were the early leaders in New Jersey’s iGaming industry, but recently Atlantic City’s Golden Nugget casino and its partnered sites have taken the lead in the state.

In another story, New Jersey State Sen. Raymond Lesniak said he plans to introduce a bill to allow gamblers in foreign countries, as well as Nevada and Delaware, to place internet bets in New Jersey.

Lesniak told the Associated Press that while the bill has not been written yet, he will propose that people in jurisdictions where online gambling is already legal be able to make online bets in New Jersey. The bill would also allow international operators to base their operations in New Jersey, and remove a requirement that computer servers be located within Atlantic City.

Lesniak said the move would enable other jurisdictions to pool their players with New Jersey and expand both markets.

“I’ve changed my mission from making New Jersey the Silicon Valley of Internet gaming to the Mecca of Internet gaming,” Lesniak told the AP. “Online gaming has helped Atlantic City to revive its casino sector with a success that we can expand in ways that will generate more revenue, create jobs and fuel technological innovation in gaming.”

You Got to Know When