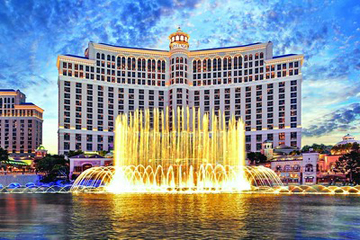 MGM’s “asset-light strategy” has borne fresh fruit in the form of a $4.5 billion deal with Blackstone Group for its Bellagio resort (l.) in Las Vegas and an $825 million deal with Phil Ruffin for Circus Circus. Circus Circus is being sold outright. Bellagio will still be MGM’s to operate under a long-term lease.

In the much larger of the two transactions, Bellagio will go to a new division of private equity giant Blackstone Group, which also owns the Cosmopolitan next door, for $4.25 billion.

Unconfirmed reports of the talks first surfaced a few weeks ago, including an outline of the terms, which will see MGM continue to operate the marquee Las Vegas Strip property under a long-term lease with Blackstone Real Estate Income Trust (REIT), in which MGM will own 5 percent. The joint venture will lease Bellagio to a subsidiary of MGM for annual rent of $245 million. The deal will net MGM around $4.2 billion.

MGM Chairman and CEO James Murren said the deal will allow the company to pay down debt, “to build a fortress balance sheet and return capital to shareholders,” adding that the transaction “confirms the premium value of our owned real estate assets.”

The sale is expected to close before the end of the year.

“As big believers in MGM Resorts and Las Vegas, we are thrilled to partner with MGM to acquire the Bellagio on behalf of our BREIT investors,” Blackstone President and COO Jon Gray said. “We look forward to a long and productive partnership with this world-class company.”

Like the Bellagio deal, Circus Circus’ sale to Kansas billionaire Phil Ruffin, who also owns the TI on the Strip (formerly Treasure Island) had been in the rumor mill for weeks. MGM had made no secret of its to determination to pursue what it calls an “asset-light strategy” aimed at paying down debt while pursuing a license for a megaresort in Osaka, Japan, a project some observers say could cost in the neighborhood of $10 billion to bring off.

Not surprisingly, the company also is reported to be shopping its flagship MGM Grand on the Strip, the last gaming resort in Las Vegas it still owns in total (not counting its 50 percent interest in CityCenter), the rest having been sold to its spinoff REIT, MGM Growth Properties.

The company also owns the MGM Springfield in Massachusetts, though MGM Growth is expected at some point to acquire that property as well.

Unlike Bellagio, Circus Circus will be transferred to Ruffin outright in a deal valued at $825 million and noteworthy perhaps more for its sizable land bank, 70-plus acres in all, than the 50-year-old casino hotel.

“The opportunity to own 102 acres on the Las Vegas Strip was very interesting,” Ruffin said. “From a strategic standpoint, Circus Circus is the most recognizable name on the North Strip. Treasure Island is the crown jewel in my portfolio, and Circus Circus adds another layer of gaming customer to my holdings.”

Ruffin entered the gaming industry in 1998 with his $165 million purchase of the New Frontier in the middle of a protracted labor strike. He settled with the union, ended the strike, and sold the aging casino hotel in 2007 for $1.2 billion to investors who planned a $5 billion megaresort. That plan never got off the ground when the global financial crisis hit in 2008-09. In 2009, Ruffin bought Treasure Island for $775 million from a cash-strapped MGM desperate to save its uncompleted CityCenter project from the fires of the financial crisis.

Ruffin also owns a casino with 1,000 machines games and electronic table games near Miami, though he’s probably best-known known nationally as President Donald Trump’s partner in the non-gaming Trump International hotel in Las Vegas. Trump was the 84-year-old Ruffin’s best man at his 2008 wedding to a former Miss Ukraine.