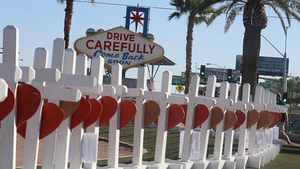 MGM has agreed to pay up to $800 million to settle dozens of lawsuits filed by victims of the tragic Las Vegas shooting. 58 people died and many more were injured on October 1, 2017 when a lone gunman fired from a hotel room in MGM Resorts on the Las Vegas Strip.

Only two days after the second anniversary of the deadly Route 91 music festive shootings in 2017, MGM Resorts announced it was ready to pay up to $800 million to settle lawsuits filed by the victims.

On October 1, 2017, Stephen Paddock began shooting from his 32nd floor hotel room in Mandalay Bay at the Route 91 country music festival being held on land owned by MGM across the Strip from the hotel. By the time he took his own life, 58 people had been killed and hundreds wounded.

With the number of lawsuits mounting, MGM sued to consolidate all the actions in one court that was designed to streamline the process and limit liability for the company. The strategy backfired, however, when MGM came under searing criticism from victims and social media activists alike.

In last week’s settlement, a lawyer for several of the victims said MGM had agreed to pay between $735 million and $800 million.

“While nothing will be able to bring back the lives lost or undo the horrors so many suffered on that day, this settlement will provide fair compensation for thousands of victims and their families,” attorney Robert Eglet said in a statement. He commented that the deal “represents good corporate citizenship” on the part of MGM.

With an estimated 4,500 victims, it’s unclear how the settlement would be divided. A court-appointed administrator will determine how much each victim will receive. But with the passing of the two-year statute of limitations for filing a claim, a settlement was logical. MGM insurers will contribute $751 million of the entire payout, with the company responsible for the remainder.

MGM Resorts Chairman and CEO Jim Murren said that the company wanted to put the tragedy behind it for the good of all involved.

“Prolonged litigation around these matters is in no one’s best interest. It is our sincere hope that this agreement means that scenario will be avoided,” said Murren.

“MGM, and also the victims and their lawyers, recognized that years of litigation did not make sense, and there was risk in taking a case forward, and that it would take a tremendous emotional toll on the victims, the community and our company,” said McManus. “We wanted a consensual resolution to this case. We did not want to be fighting with the victims and their families.”