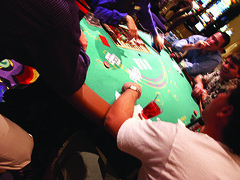 Blackjack players have filed a class action lawsuit claiming MGM Springfield in Massachusetts is paying less than state regulations allow on winning hands at some tables. The claims, including in a lawsuit filed last week in Hampden Superior Court, echo those made in a similar suit filed against Wynn Resorts’ Encore Boston Harbor.

MGM Springfield denies the allegations and said it follows state regulations on the payouts. “We comply with all Massachusetts Gaming Commission regulations and feel confident that this lawsuit will be found to have no merit,” said MGM Springfield spokesman Saverio Mancini.

In response to the suit against Encore, the Massachusetts Gaming Commission investigation and Enforcement Bureau issued a memo July 18 explaining the two different blackjack variations and it included photos of the odds on the blackjack table.

Elaine Driscoll, spokeswoman for the Massachusetts Gaming Commission, told MassLive.com that the commission is aware of the lawsuit and is determining the next steps.