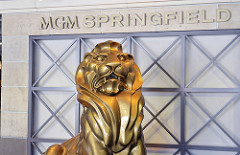 When the 600-pound golden Leo the Lion arrives, the opening of the MGM Springfield cannot be far off. And in fact, the $960 million casino will be opening in the Bay State’s third largest city on August 24.

The six foot tall lion was built by the George M. Raymond Co. of Las Vegas for the entrance to the casino, just inside the garage. That puts it in line with all previous MGM properties, all over the globe. Last week it arrived by truck.

The grand opening will be marked by a large parade through the city’s South End that will include most of those employees, led by VIPS and the famous Budweiser Clydesdales. Thousands of city residents are expected to line the streets for the big opening weekend, and to get their first look inside.

In the weeks leading up to the grand opening MGM has made it a point to buy as much as possible from local vendors. Including services such a uniform cleaning.

The Republican reported last week that the locally owned Park Cleaners is starting to launder chefs uniforms for the casino as the kitchen staff begins practicing its craft. The business has been in the same family for more than eight decades. It expects its volume to more than double under the new contract. This will mean buying new, modern equipment to help launder clothes faster.

The company is one of many local companies that the casino will be spending an estimated annual $50 million in contracting for goods and services.

Other vendors include the Yankee Mattress Factory in Agawam and Italian treats for hospitality gift baskets from Frigo’s.

The contracts are a force multiplier to the 3,000 jobs in terms of economic activity the casino will spark. Others include La Florentina Pastry Shop in Springfield and Chicopee Provisions, to name a few.

The casino is also planning to have a microbrew beer bar, which led it to a contract with Iron Duke Brewing, a relatively new business that currently sells to about 100 area taverns.

Owner Nicholas Morin is enthusiastic about the opportunity. He told the Republican, “[T]his is a huge opportunity for us to get our beer in front of all the tourists who will be coming to town.”

Springfield’s White Lion Brewery is also enjoying the new largesse. It has created a special German style lager called “King of Hearts,” just for the casino.