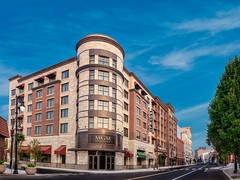 MGM Springfield’s inaugural year was a success as far as President Michael Mathis is concerned—this although the casino underperformed in terms of revenues that were promised to the Massachusetts Gaming Commission. Mathis cited jobs, visitation and local economic activities as benefits.

It’s been a year since MGM Springfield opened in Massachusetts’ third largest city, and despite the fact that the $960 million casino has underperformed in terms of expectations, its president, Michael Mathis, last week called the first year a success.

Mathis told a roomful of reporters during a 45-minute press conference, “I think there were a lot of naysayers that first said we would never build this. Then they said people wouldn’t come because it’s Springfield.” He added, “And a year later, six million visitors later, we’re knocking the cover off the ball on many, many facets of it.”

Mathis noted that the casino on 14 acres in the downtown area brought in “world-class entertainment” to the city’s once blighted South End, hired more than 2,500 people and found 40 percent of them in Springfield. Its original goal was 35 percent.

The president also pointed out that traffic congestion and increased criminal activity did not happen, as many predicted.

For July, the casino’s gross gaming revenue was $20.4 million, 2.23 percent higher than the previous month. Of that, $15.5 million came from slots and $4.9 million from table games. Originally, MGM told the Massachusetts Gaming Commission that the casino would bring in $418 million in annual gross, or $34.8 million a month. The closest the casino has come to that was in September 2018, when it grossed almost $27 million.

Mathis downplayed declines in gross gaming revenues and taxes paid to the state. He said other factors are important too, including jobs creation, local economic activity and the collateral effects of gaming on other business sectors. He added that the casino will take three years to fully realize its potential.

“It’s just a matter of when we are going to be able to get there,” Mathis said. “It’s going to take some time in a market like this. If you look at any other facility in the market, there’s always a ramp-up.”

In a separate statement Mathis said, “We continue to be pleased with our performance as we grew revenues and visitation in the month, notwithstanding the entry of a new competitor to the market. Visitors from across the region have responded well to the breadth of our overall entertainment, which included Aziz Ansari at Symphony Hall, Warrant and Firehouse in our plaza, and a strong Roar Comedy lineup in our Armory.”

He added, “We have a dynamic casino marketing program planned that includes four spectacular Aerosmith shows for our one-year anniversary, as well as food specials, free outdoor concerts, and a fun new Casino Bar. We are especially proud of the economic stimulus we have produced downtown in Springfield since our opening, as the city enjoys billions of dollars of investment since our entry into the market.”

Nevertheless, Springfield’s revenues are significantly overshadowed by the opening on June 23 of the $2.6 billion Encore Boston Harbor, which grossed $48.6 million in July, its first full month of operation.

By way of another comparison, Plainridge Park Casino in Plainville grossed $12.5 million in July, a 7.4 percent drop from June.

Competition from that quarter, as well as a stronger than anticipated loyalty to MGM’s archrivals in Connecticut, Foxwoods and the Mohegan Sun, have also been a factor, Mathis told reporters.

“This market has some really strong competitors that have been in the market for 20-plus years,” he said. “So, I think we underestimated that level of loyalty and what it would take for those customers to give us a shot. We’re a little behind in our first-year projections, but I feel good about the trajectory of it.”

The Mohegans and the Mashantucket Pequots always viewed the MGM Springfield as an existential threat and have done everything they could to blunt its effects on their revenues, including beginning to build a satellite casino in East Windsor 14 miles from Springfield. Nevertheless, Mathis downplayed MGM’s attempts to thwart the tribes and implied that the East Windsor casino is of minor concern. “Is the customer going to save 10 minutes to go to a facility that does not offer what we do?” Mathis asked.

He added that MGM is far more interested in developing a casino in Connecticut’s largest city of Bridgeport, where it could take advantage of a market that New York’s newer casinos have had to themselves for several years. “The focus is less on East Windsor and more on Bridgeport south. South is where Connecticut would be best served,” said Mathis.

Allies of the tribes in the Connecticut legislature have introduced a bill that would allow the tribes to operate a tribal casino in Bridgeport and once more head MGM off at the pass. This prompted MGM to file a federal lawsuit against the Department of the Interior for allowing a change to the tribal state gaming compact that allowed for off-reservation casinos.

At the beginning of this year, MGM International announced plans to reduce costs, operate more efficiently and place itself to take advantage of new technology. The company has already reduced some of its workforce. For example, MGM Springfield opened with 3,000 employees and now has 2,500. Mathis observed, “We right-sized the business throughout opening period. Employees go. Employees come.”

MGM International CEO James Murren alluded to Springfield’s less than spectacular first year when he told a conference call of industry analysts, “So if we’re behind in someplace, like we’re behind in Springfield, we’re ahead in many other places. And that is the value of being a diversified company.”

Genting Goes All In