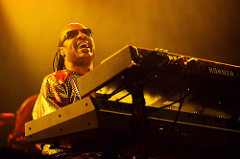 Pop star legend Stevie Wonder will open the MGM Springfield on September 1, about a week after its August 24 grand opening. The 2 million square foot center  that is spread over three city blocks will include a hotel with 250 rooms, retail, dining, and a casino with 2,550 slots and 120 table games

Talia Spera, executive director of  Arena Operations for the $960 million MGM Springfield said the concert will “usher in a new era of exciting world-class entertainment for the city.”  Wonder will be performing at the MassMutual Center, which the casino is managing.

Decades ago, when it was known as the Springfield Civic Center it played host to Elvis Presley, Bruce Springsteen, Prince, Bob Hope, Robin Williams and Eddie Murphy.