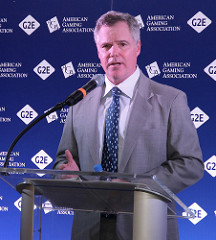 In February, MGM Chairman & CEO Jim Murren denied that his company was interested in buying Wynn Resorts, which at that time was in disarray following accusations against its former chairman, Steve Wynn. Since that time, Wynn has resigned from the company and sold all his shares, thereby severing all ties. This could relieve regulatory pressures, particularly in Massachusetts and Macau.

But last week, the New York Post ran a story quoting anonymous sources that said MGM has approached Wynn executives via back-channel means to probe whether the company interest in selling. One source told the newspaper that he thought Maddox would sell “if the price were right”

One of the regulatory issues that still faces Wynn Resorts is the fact that there have been few changes to a board that was loyal to Steve Wynn, and supposedly should have known about a $7.5 million harassment settlement made by Wynn personally, but not revealed in regulatory filings in Massachusetts. That lack of movement could mean a sale in imminent, said the Post story.

“That inference corroborates to me that there will be a sale,” said a gaming source quoted in the story.

A perceived hurdle, however, would be the situation in Macau, where MGM and Wynn, along with Sheldon Adelson’s Las Vegas Sands, are the only American operators. With a trade war ramping up between the U.S. and China, these licenses could be pulled starting in 2020, when they begin to expire.

The stock price for both companies rose briefly on the report, before settling back to their normal levels.