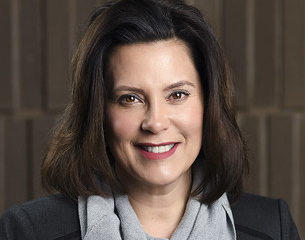 After some final tweaking, a package of gaming bills approved by Michigan lawmakers was forwarded to Governor Gretchen Whitmer (l.), who said, "As I understand the bills, I plan to sign them." The legislative package, sponsored by state Rep. Brandt Iden, would legalize sports betting, online gaming and daily fantasy sports. Tax on sports betting is 8.4 percent, but online gaming slammed with taxes between 20 percent and 28 percent.

In Michigan, just before the 2019 legislative session ended last week, a package of gaming bills, including the Lawful Sports Betting Act, passed the state Senate in a 35-3 vote and the state House in a 100-8 vote just a few hours later.

Governor Gretchen Whitmer said, “As I understand the bills, I plan to sign them.”

In addition, it would make regulatory changes related to charity poker rooms and repeal the ban on individuals with at least a 1 percent stake in a casino donating to candidates or political committees. Now the legislative package will go back to the House for concurrence and then on to Whitmer’s office for her signature.

State Rep. Brandt Iden, who sponsored the legislation, said getting the state’s tribes to agree to it was a major challenge. He stated he expects Michigan’s law to be the example for other states with significant tribal gaming interests.

In a statement, Press Secretary Tiffany Brown said, “The governor is pleased with the progress made on gaming over the course of this year, particularly once Senator Curtis Hertel and Representative Rebekah Warren were able to engage and resolve key issues to get this package across the finish line.

“The governor’s top priority when getting this done was to protect the School Aid Fund, and Senator Hertel and Representative Warren helped make that happen and addressed a number of other concerns she had. This is a good, bipartisan solution made possible by working together on a complex issue, and the governor looks forward to closely reviewing this package once it hits her desk.”

Hertel and Warren worked with Whitmer’s office, as the governor had expressed concerns that online gaming would cannibalize revenue from Michigan’s lottery and therefore public education. Also, Whitmer initially wanted a 15 percent tax on sports betting, but the rate is 8.4 percent in the final bill. The compromise was to increase taxes on online gambling, from 4 percent-23 percent to 20 percent-28 percent. Michigan casinos agreed to the substantial tax rate increase in order to get online gaming legalized.

The casinos did receive one concession, at least for the first five years of online gambling: they will be allowed to deduct free-play money given to customers as a promotional expense.

The measure also includes a clause ensuring commercial casinos won’t offer internet gambling before tribal casinos, and vice versa. “There was a concern among tribes that casinos would have an edge getting licensed by the state since they already are licensed. So we had to give some insurances to the tribes that they would have equal footing when it comes to licensing,” Hertel said. This provision could delay the start of online gambling if tribal casinos aren’t ready to enter the market as quickly as commercial casinos, he noted.

The proposed law allows Michigan residents or individuals located within state borders to register remotely for sports wagering accounts. It’s estimated monthly sports betting handle could reach $200 million to $300 million within a year of going live. Hertel said that could happen in time for the National Collegiate Athletic Association basketball tournament in mid-March.

Professional sports leagues also praised the bill for mandating licensed sports betting operations to purchase data from leagues, at “commercially reasonable” rates, for any in-game wagering. Michigan follows Tennessee and Illinois in including the mandate.

State Senator Ed McBroom voted against the legislation. He said, “The state of Michigan is addicted to people’s money. It preys on the most vulnerable society. The business of gambling does everything it can to take the largest amount of money from every user it can. It’s not like going to Disney World, where you get what you pay for. It takes, it takes and takes and takes with the illusion of a payout that is statistically unlikely to ever happen.

“The state and the house always wins. And now, the expansion and organized sports betting is a huge step that furthers the harm and what it does to society.”

Game of the Week: Fa