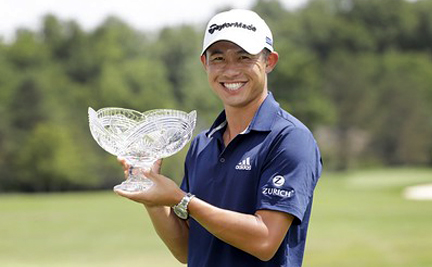 While it wasn’t unexpected for Collin Morikawa to win the Workday Charity Open last week, he did it in a fashion that pleased one bettor from Illinois, who won over $1 million on a trio of wagers on the up -and-coming golfer. The big guns return this week in the Memorial and betting opportunities abound.

Collin Morikawa has more victories than missed cuts in his short time on the PGA Tour. So it wasn’t out of the realm of possibility that he’d at least contend in last week’s Workday Charity Open at Muirfield Village in Ohio, home course of the Bear, Jack Nicklaus. With 28-1 odds on victory in the tournament for Morikawa, a young gun who exploded onto the tour late last year, a savvy bettor could recognize opportunity when he saw it.

And one bettor in Illinois did, placing several wagers on Morikawa with BetRivers, the first mobile wagering site in the state. And to say he doubled down on Murikawa is an understatement. The gentleman placed a wager of $4,000 for Morikawa to be leading on the first day with odds of +5000. Then he placed a second wager of $28,000 that the golfer would finish in the top 5 at +750. And finally, a $10,000 bet that Morikawa would win the whole shebang, which of course he did.

After Day 1 he had more than covered his buy-ins with a win of $204,000 after Morikawa led the pack. He maintained that lead and grew it to three strokes on Friday, but his “bad” day on Saturday when he shot a 72 left him two strokes behind Justin Thomas headed into the final day. Like two prizefighters, two of the best golfers playing today went back and forth, but it looked like Thomas had thrown the knockout blow when he birdied the 15th hole and took a three shot lead with three to play.

But bogies on the 16th and 18th opened the door for Morikawa who drained a long birdie on 18 to force a playoff. It took three holes, an errant shot by Thomas on the final fairway clinched the win for Morikawa—and the Illinois bettor, who was even luckier that weekend, adding wins in the UFC and Spanish La Liga soccer to cash out over $1 million.

Richard Schwartz ,president of Rush Street Interactive, which operates the BetRivers sites, said this was the biggest payout ever at the newly launched BetRivers.com in Illinois

Schwartz says that BetRivers is also live in Pennsylvania, Indiana and Colorado.

“Our Betrivers.com online Sportsbooks have grown extremely fast by offering users a high quality user experience and chances to win big,” he said. “Well, winning big is exactly what just happened this weekend at BetRivers.com for this bettor who won over a million dollars!”

It will be hard for this week’s tournament, the Memorial, to match the drama on Sunday, but it’s the same setting so we can hope for the same finish. Since the PGA Tour schedule was so crazy with cancellations, last week was supposed to be empty, but the PGA built the Workday event to precede the Memorial and held in the same place, Muirfield Village. While pin placements, tee boxes and rough length might be a little different, it’s the same course. Rather unprecedented in PGA history.

But the big difference will be the field. Usually limited to 120 golfers, this year’s Memorial will feature 133 of the best golfers in the world. And that includes the top 5 in the FedEx Cup standings— Webb Simpson, Justin Thomas, Sungjae Im, Bryson DeChambeau and Rory McIlroy. But the kicker is the Memorial is the first tournament since the break that will feature the world’s most popular golfer, Tiger Woods, who has won this tournament five times.

So how do you bet a tournament with all the superstars playing on a course they are all familiar with and one of the most prestigious trophies on the tour? There lies the conundrum.

My first impression would be to bet the loser in the Workday event. Justin Thomas is not only one of the best players on the tour, but he’s also well known for correcting mistakes he may have made. While largely unprecedented on the PGA Tour, playing a course two weeks in a row should give him an advantage.

Why not Morikawa, the winner? He’s got to be a bit complacent now that he’s won for the first time this year.

What about Bryson DeChambeau, who took last week off after winning at the Rocket Mortgage Classic in Detroit two weeks ago? Or what about Dustin Johnson, who won his 21st PGA event in Connecticut in late June? Both are co-favorites at 17-1.

Register to play at PlaySugarHouse.com and get up to $250 in matching bonus money on your first deposit. PlaySugarHouse requires only a 1x play-through to convert bonus money into cash—it’s one bonus system you won’t find anywhere else!

The theme for these comeback events since the Covid-19 delay, now into its 8th week, has been the hot golfers. So who has been in the top 10 consistently since the Schwab but hasn’t won? How about Gary Woodland, who has been hanging around all year? Woodland is 45-1, a great price for a great golfer.

Victor Hovland has been circling the victory circle all year and it’s just a matter of time before he breaks through. He’s at 25-1. By the way, that’s the same price as Tiger if you’re a big fan. Also the same rank Tiger has on the FedEx Cup standings at number 25.

But the best bet? The number 4 player on the FedEx Cup standings in Sungjae Im. He’s somewhat ignored because he gets no press, but when can you get a player of that quality at 50-1?

Check your favorite sports books for the prop bets because this tournament has a ton of them. Whether it’s PointsBet, BetRivers, BetMGM, William Hill or others, the odds are very creative, and hey, you never know, you could win a million!

Has Gambling on Espo