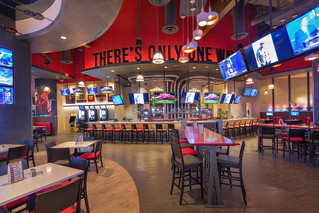 Sports wagering was legalized in Mississippi about a year ago. Year-to-date, the wagers have taken in $176.5 million, grossing $19.1 million. But with sports betting at Southland (l.) and Oaklawn racinos in Arkansas and online/mobile sports wagering coming to Tennessee, Tunica casinos will face new competition for those dollars.

Sports betting has been legal in Mississippi for slightly more than a year, and Mississippi Gaming Commission Deputy Director Jay McDaniel has said, “We are right where we thought we would be.” Year-to-date, the state has taken in $176.5 million in sports wagers, grossing $19.1 million. McDaniel said, “Football season is gonna more than double that. That kind of follows what we saw last year on football wagers.”

However, McDaniel cautioned that Tunica casinos are facing competition in nearby Arkansas and Tennessee. McDaniel noted, “Tunica revenues are about 50 percent down from six or seven years ago. More sports wagering options would put a bite into them. You want to try and stave off the competition.”

Another threat could come from Tennessee, where legalized online sports betting is expected to launch by early 2020. The state Lottery Corp. will regulate online, interactive and mobile sports gaming, and establish an oversight council. Gaming companies would pay an annual licensing fee of $750,000, and geofencing would ensure bets are made within state borders. Lottery Corp. spokeswoman Kym Gerlock said no timeline has been established for the sports betting launch but she said officials are “working hard” to set the rules and format.

However, Caesars Mid-South Regional President Scott Barber said sports betting has benefited Tunica casinos. “It allowed Tunica casinos to enhance offerings and appeal to customers who may not have visited Tunica in a while. It hasn’t just been about wagering on sports, but also the ancillary business.” McDaniel noted food and beverage revenue and hotel stays have increased, especially during football season and during the NCAA Basketball Tournament in March.

Gold Strike Casino Sports Manager Art Heun said the sportsbook “stays packed in there on weekends. Foot traffic in the casino has increased since we added sports betting.” Barber said Horseshoe Casino has expanded its Bluesville venue to hold up to 500 people for watch parties. But he added, “We will certainly keep our eye on the development of surrounding markets like Tennessee and Arkansas. We are optimistically hopeful that one day Mississippi will have mobile wagering.”

No Change In Michiga