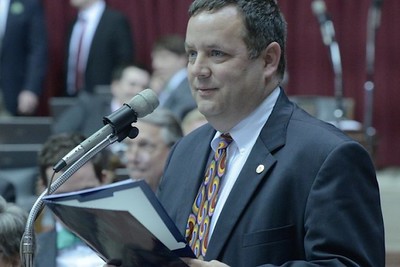 Missouri’s House Special Committee on Government Oversight has approved a bill to legalize sports betting and slot machines. The bill, sponsored by State Rep. Dan Shaul (l.), calls for the activity in entertainment districts in Kansas City and elsewhere.

Efforts to bring sports betting to the Show Me State didn’t pass in time for fans to wager on the Kansas City Chiefs. Maybe sports wagering will be on the books if the team repeats next year.

The first legislative step to legalize sports betting and slot machines got the green light January 28 when the House Special Committee on Government Oversight approved HB 2088 and sent it to the House floor.

“What this does is basically allows the Power and Light District (in Kansas City) and also Ballpark Village areas to become an entertainment district so that they could also do sports betting and VLT’s,” Shaul testified.

“I believe before this bill is done, they’ll be some expansion of that to some other players that will want to be involved,” Shaul said.

Slot machines have been a high-profile issue, dominating discussion at several House interim gaming hearings in the fall. The Missouri State Highway Patrol testified that the number of complaints about illegal gambling increased from 39 in 2018 to at least 145 in 2019. Most of those complaints dealt with slot machines.

Shaul’s legislation would allow the Missouri Lottery Commission to implement a system of video lottery game terminals and to issue licenses to manufacturers, distributors, operators and handlers. Terminals would be connected to a centralized computer system developed by the Lottery Commission.

Meredith said the legislation should go to a statewide vote, noting the Missouri Lottery’s creation and other major gaming issues went to voters.