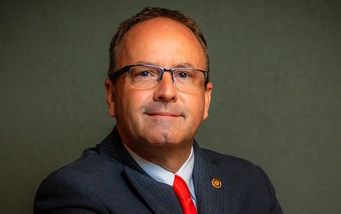 Missouri law only allows 13 casino licenses—all taken—along the Missouri and Mississippi Rivers. But state Rep. Rocky Miller (l.) has proposed a constitutional amendment allowing a 14th casino on the Osage River near the Lake of the Ozarks. His House Joint Resolution 87 has passed two committees so far.

Missouri state Rep. Rocky Miller’s House Joint Resolution 87 proposes a constitutional amendment to allow a 14th casino, located on the Osage River, between Bagnell Dam and the Missouri River near the Lake of the Ozarks. Miller’s measure recently was approved 3-2 by the House Special Committee on Government Oversight and 6-1 by the Rules Committee.

“All the bill really does is put out to a vote of the people adding the Osage River to the possibility of getting a license, if one becomes available in the future. It has to be where it’s a benefit to the community and to the state. And the way to ensure that is to make sure it goes through the legislative process, and that’s what we’re doing here now,” Miller said.

Currently, riverboat gambling, regulated by the Missouri Gaming Commission, is limited to 13 licenses and only is permitted along the Missouri and Mississippi Rivers.