HomeThe ShuffleMLB 2021: How to Bet on Major League Baseball

MLB 2021: How to Bet on Major League Baseball 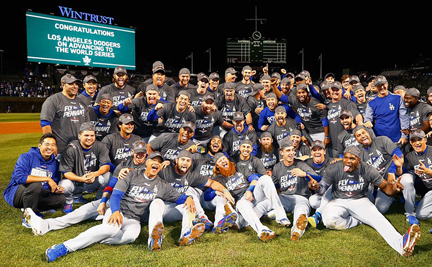 Spring training is a sign that winter’s coming to an end. It also signals smart bettors to get an edge now that Major League Baseball signings, trades and off-season moves are behind us.

The start of the MLB season with spring training is a sure sign that winter’s coming to an end. It’s also a sign for smart bettors to get an edge, with all the signings, trades and off-season moves behind us. Can the MLB World Champions win 105 games? Here are a few suggestions for betting the overs & unders for wins as pitchers and catchers report. 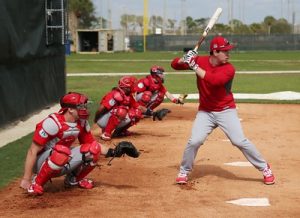 There’s nothing like the phrase “pitchers and catchers”—the first day of MLB spring training—to get baseball fans going. For the most part at this point in the MLB season, the free agents have all been signed, and the trades have all been made—though adjustments are always possible—and it’s time to evaluate how each team changed in the off-season. Once the lineups are set, bettors can make more informed futures bets.

You always hear about the bettor who wagered a little to win a lot. For example, the odds of the Tampa Bay Rays of winning the World Series last year was 18-1. The Rays came within one game of upsetting the eventual champions, the Los Angeles Dodgers, who started the season as a 6-1 favorite. You can wager on which team will win each division, who’ll be the home-run king or batting-average champion, or who will win the Cy Young Award.

But the one bet that keeps you invested and interested through the entire season is the over/under bet on victories for each team. At the start of spring training, most front offices have made the moves that will shape their teams for the season. Some teams made lots of dramatic moves, others more subtle, and some teams almost stood pat over last season, even though they didn’t sniff the playoffs.

Online sportsbooks—William Hill, PointsBet, BetMGM, BetRivers, Pala and others—establish a win total that predicts how many wins each team will reach during the season. These totals take into account all the off-season activities of the team, including the results from the previous year. Of course, bettors should consider these things too. But the abbreviated 60-game season in 2020 makes predictions about a full 162-game season in 2021 a bit more difficult. You can extrapolate for a full season. But no one knows what kinds of injuries, slumps or hot streaks could have happened in those extra 100-plus games. So fair warning.

While the over-under totals posted by sportsbooks are all similar, there are important differences of a couple of games or even half-games. Believe it or not, these can make or break a bet. There are hundreds of stories of teams getting within one win of the total with five games left who suddenly go into a tailspin and lost five straight. So shop carefully. The totals we mention in this article are from William Hill, but shop around for the best totals in your own opinion.

Whatever happened in 2020, it either whetted the appetite of teams that came close to the holy grail, or will be ignored as inconsequential by the teams that struggled. And the off-season seemed to reflect that wisdom.

In some cases, it was a matter of the rich getting richer. The champion Dodgers anted up more than $100 million to add Trevor Bauer, another stellar arm, to their already powerful rotation for this season. They re-signed sparkplug third baseman Justin Turner, and added some quality arms to their stout bullpen. These additions give L.A. the highest win total in the Majors, 104.5. 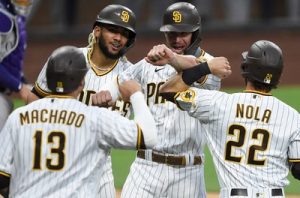 This MLB season, the only good team in the National League West is the San Diego Padres, so the Dodgers should feast on the other organizations—the Arizona Diamondbacks, San Francisco Giants and Colorado Rockies.

The Padres enjoyed their own shopping spree this year. After being edged by the Dodgers in the playoffs, they signed Blake Snell, the former Rays pitcher who gave the Dodgers fits in the World Series. They also signed Yu Darvish, who played for the Dodgers in the infamous 2018 World Series that some believe was stolen by the Houston Astros. The Japanese ace rounds out a superior pitching staff. Add catcher Victor Caratini and outfielder Tommy Pham, and the Padres are a legit contender in the National League West. And with a total of only 93.5, if they play the Dodgers even, they also feast on the weak NL West teams.

The New York Yankees are the team to beat in the American League. They re-signed batting champ DJ LeMahieu and shortstop Gleyber Torres, along with sluggers Aaron Judge, Gary Sanchez and Luke Voit. They also added pitchers Corey Kluber and Jameson Taillon. But are they on pace for 96 wins? The American League East remains tough with the Rays, a vastly improved Toronto Blue Jays squad, and a resurgent Boston Red Sox.

The other team that made a big splash over the winter was the New York Mets, who added one of the best shortstops in baseball in Francisco Lindor, as well as starting pitcher Taijuan Walker and centerfielders Albert Almora and Kevin Pilar. But continuing rehab by Noah Sindergaard will keep the team’s top starter out until mid-June. And with a strengthened division featuring 2019 World Series champs the Washington Nationals, the always-competitive Atlanta Braves and the comeback Miami Marlins, hitting 90 wins could be a dream.

Betting the favorites is always fun, but it’s the mid-level teams that are fascinating. The Chicago White Sox have been working on their team for several years, but don’t have the results to show for it. Could this be their year? With the Cleveland Indians losing Lindor and Kluber, they could drop off (reflected in a low win total of 81). The Minnesota Twins are always contenders, but can a stay-put offseason approach justify 89.5 wins? The Kansas City Royals have quietly improved, so maybe their 73 wins is an edge.

Start the week with a Free Bet at BetMGM.com. Win or lose, your sports wagers pay off every week! Just opt in to the Money Monday Club for your weekly $10 Free Bet! 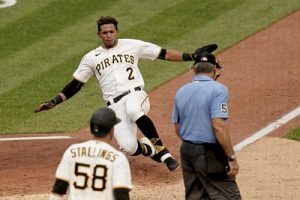 Even more fascinating this MLB season is taking a run at the worst teams in baseball—the dregs of the leagues, who did nothing to improve themselves over the offseason. The Pittsburgh Pirates did the opposite, trading away some of their best players—of course, best in Pittsburgh is all relative. Nonetheless, the youngsters will get a chance to shine for the Pirates, and who knows? Maybe they’ll come through. But will they lose less than 100 games? Is 58 victories too much to ask?

No other team is predicted to lose 100 games, although it happens multiple times in a season. Can the Baltimore Orioles actually win 63 games? Can the Colorado Rockies win enough in the NL West to avoid 100 loses and win 63.5? Do the Detroit Tigers have enough ammo to even avoid 95 losses and win 67.5?

Get a free sports bet at PalaCasino.com. Just sign up, log in and add to your betslip. Then select your exclusive free bet from the drop-down menu, and enjoy the game!

To really get invested in the current MLB season, check out the players during spring training. Pick five or six teams. Try to sprinkle the overs and unders so you can celebrate both wins and losses. Pay attention to the odds when you make over/under bets, however. Depending upon what happens early in spring training, those bets can fluctuate from the original -110 to -120, -150 or even higher. To get the best odds, make your bets early, sit back and enjoy!

For more insights on how MLB trades will change the game, read here.