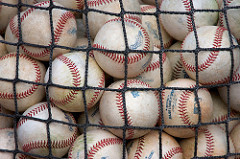 The deal gives Sportradar international rights to provide MLB data to international media as well as sports betting operations. However, in the U.S. Sportradar will only exclusively provide data to the media.

Sportradar will also serve as the official supplier of MLB’s real time betting data feed in the U.S. where distribution to regulated sports betting operators will be on a non-exclusive basis through Sportradar and additional authorized distributors, according to a press release.

The length of the deal and financial details were not released.

Sportradar now has sports data deals with all four major U.S. sports leagues, but those deals are also not exclusive in the U.S.

However, according to the website Sports Handle, about 75 percent of Nevada sportsbooks already use Sportradar to acquire data relating to MLB. Sportradar collects the data from games in real time in stadiums and also provides sportsbooks with live in-play odds and related products reflecting on-field events.

There is a sports betting bill before Congress that would in part require sportsbooks to purchase “official” statistics form sports leagues. Some states, such as New York and recently Indiana, are including similar requirements in proposed sports betting legislation.