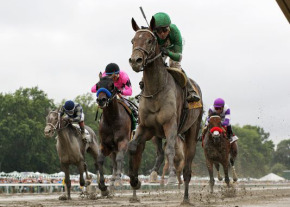 The Haskell, in its 50th year, is loaded with intrigue. It has been won by classic horses like American Pharoah, the 2015 Triple Crown Winner, and Exaggerator, the Preakness winner who defeated Kentucky Derby champion Nyquist there last year. There was also the thrilling stretch duel between Bet Twice and Alysheba in the 1980s. They had combined to win all three Triple Crown races—the Kentucky Derby, Preakness and Belmont Stakes—and Bet Twice nipped Alysheba here.

The Haskell sits as a prominent event in between the Triple Crown races and the fall Breeders Cup.

Battle of Midway was third at the Kentucky Derby and tries to give a repeat win to his trainer Jerry Hollendorfer, who won the Haskell in 1989. Girvin is a multiple Grade II stakes winner. Irish War Cry won the Wood Memorial, was a disappointing 10th in the Kentucky Derby and a strong second to Tapwrit in the Belmont Stakes.

Trainer Chad Brown has two entries here. One is Timeline, who hasn’t faced this level of competition, but has captured all four of his races and is the only entry with a race over the track. That’s usually a big plus. Practical Joke, fifth in the Kentucky Derby, also has a legitimate shot.

Hence and McCraken, two ralliers, hope for a speed duel to run at.

Saratoga offers a different lap of luxury. The fabled New York meet, which runs until Sept. 4, has a dizzying 69 stakes races worth nearly $19 million. Weekends are absolutely carnival-like and this will be no exception.

On July 29, it offers nearly $1.5 million in big races. The $600,000 Jim Dandy, $350,000 Vanderbilt, $250,000 Bowling Green and $200,000 Amsterdam events comprise a jam-packed card. Any of these could be the season highlight at a small track. But, here? They combine to attract big crowds, top horses and lucrative handle from a sophisticated public that values high-quality racing and lowest possible takeout percentage from bets.

The following weekend is strong too. Saratoga returns with the $1.2 million Whitney and the $500,000 Test Stakes Aug. 5. Mountaineer in West Virginia chimes in with the $750,000 West Virginia Derby. Thirteen races of at least six figures are set to go at various tracks around the country that day.

As suggested here a couple weeks back, the defending champion Cubs are making a run and the Houston Astros continue to be involved in high-scoring games. The Yankees made their bullpen awesome by getting David Robertson to join Dellin Betances and Aroldis Chapman. The Dodgers continue to amaze.

As the summer races heat up, Aug. 9 marks the start of NFL preseason football.