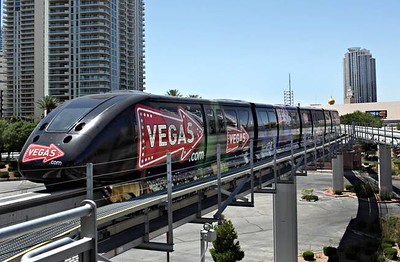 The sale for $24.2 million of the Las Vegas Monorail to the Las Vegas Convention and Visitors Authority, has been approved by a bankruptcy judge. The sale will make possible a Downtown route people mover by Elon Musk’s Boring Company.

A bankruptcy judge has approved of the sale of the Las Vegas Monorail to the Las Vegas Convention and Visitors Authority. The sale will enable Elon Musk’s Boring Company and others to bring an underground Tesla-based people mover to the downtown.

The purchase was for $24.2 million, which will come from the authority’s reserves.

The 3.9 mile elevated transit system Las Vegas Monorail, which has operated since 2004, has had an exclusivity clause that prevented other mass transit companies from coming into the Strip. However, due to the pandemic, its ridership plummeted and it closed March 18 and shortly thereafter went into bankruptcy.

The rail runs from the Sahara at the north end to the MGM Grand and includes the convention center.

LVCVA CEO Steve Hill hailed the sale. “We are pleased the U.S. Bankruptcy Court today approved the sale of the Las Vegas Monorail Company’s assets to the LVCVA and look forward to the close of the transaction in the coming weeks,” he said.

LVCVA Chairman Larry Brown commented on the logic of the sale in July, “Again, it’s the Boring Company and others that – what technology is out there, be it light rail, BRT (bus rapid transit), to be able to come in and expressly from the private sector invest in that corridor,” LVCVA Board Chairman Larry Brown said back in July.

Curtis Myles, the president and CEO of the Las Vegas Monorail Company said, “This sale ensures the future viability of the system and creates a path forward for the LVCVA and experienced Monorail operators to work together to reopen the system at the appropriate time to once again carry millions of visitors, eliminate vehicle emissions and congestion and aid in the recovery of our tourism economy.”

The Boring Company recently unveiled the proposed route for its underground people mover as part of an application to the Las Vegas Planning Commission, which approved it before sending it to the City Council. The company is completing its Convention Center Loop at the convention center.

It has been working on the project for about a year and has so far spent $52.5 million. In October the Authority and Musk announced the “Vegas Loop” a 7 mile segment that would begin in the downtown and run under Las Vegas Boulevard to Allegiant Stadium.

The authority has working to complete its $980 million expansion of the convention center that will add 1.4 million square feet.