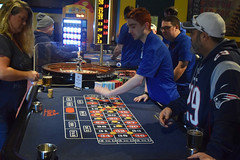 Since the law passed legalizing sports betting in the Granite State, seven New Hampshire cities have expressed an interest in being one of 10 cities that legalize sportsbooks within their jurisdictions. Cities like Nashua, home of the River Casino Sports Bar (l.), have joined forces to put referendums on the November ballot.

A total of seven New Hampshire cities have expressed an interest in being among the 10 that legalize sportsbooks and have joined to put referendums on the November ballot. The most recent was Nashua, the state’s largest border town, where Charlie McIntyre, executive director of the New Hampshire Lottery, told the board of aldermen, “We are looking for high-end, sort of sports-bar entertainment.”

Other cities that chose to put measures before the voters include the state’s largest city, Manchester, as well as Laconia, Franklin, Dover, Concord and Berlin. Claremont, Portsmouth and Somersworth are studying the issue.

The state Office of the Lottery has an open Request for Proposal (RFP) for sports betting operators. The bill passed by the legislature two months ago allows for licensing up to five mobile platforms and 10 brick-and-mortar sportsbooks.

The law requires that cities that want to host sportsbooks put this question to the voters: “Shall we allow the operation of sportsbook retail locations within the town or city?”

New Hampshire has a unique charity casino program, in which a selected charity collects 35 percent of the proceeds and the state lottery gets 10 percent. The River Casino Sports Bar in Nashua is one such casino, with 12 tables and eight poker tables.

In an exclusive interview with GGB News, Jim Rafferty, general manager of River, explained why he’d like to offer a sportsbook at the operation near the Massachusetts state line.

“When charity casinos in New Hampshire were authorized a dozen years ago, myself and a bunch of gamers said, ‘That sounds like fun,’” said Rafferty. “You have a charity for every day you operate. It’s not a great way to make money, but if the worst case happens, you’ve given a lot to your local charities and that isn’t bad.”

Compare that to giving 40 percent to the state, “and it evaporates,” said Rafferty. “If you give it to the Boys and Girls Club at your local city, you can see what they did with it. Why not? Over the 12 years we’ve done it, we’ve raised $3 million and we’re proud of that. Maybe if we get sports betting, that will help even more.”

His casino is a casino and a sports bar. “We’re very sporty,” said Rafferty. “If any charity casino should have sports betting, it’s the River. The state authorizes 10 brick-and-mortar locations for sport betting and we have twelve charity casinos,” Raffety says. “It’s a natural place for them to be. We have the cages and surveillance system.”

He notes that the lottery’s RFP (which is still out) suggests the lottery will “look positively” on agents that include retail at charity casinos. “That’s because they think it’s a positive place to go,” Rafferty told GGB. “We have a bunch of people calling us to say that they’re going for mobile licenses and asking us to join them.”

The RFP schedule calls for technical submissions this week, with price proposals due September 30, notification of selection to be announced October 17, with final contracts to be approved by November 20.

Rafferty’s casino did not bid. “We considered reaching out, but we’re very actively trying to be part of other bids as their retail component.”

He doesn’t expect sports betting to be a big money maker for his casino—but says it will attract players who will then avail themselves of the casino’s other amenities.

“I’ve been in the business too long and closed a couple of sportsbooks because it was more economical to put slots,” he said. “We know it’s a low-margin business. People are really good at it. The reason for us to do it is the side play. If people are cashing in a sports bet, they’ll make a play and the charities and I will benefit. We do a great business on Patriot game days. Those are 16 of our biggest days of the year. Our sports bar is packed. We think sports betting increases that feeling and makes it more positive.”

Brick-and-mortar establishments will get nothing from the mobile apps, which will be subject to a separate bidding process by providers. But Rafferty says 20 percent of bettors want to go the casino and experience the excitement of sports betting. “We think that 20 percent will grow as people have a lot more fun,” he said, especially if people are watching an exciting game and the betting kiosk is beckoning them.

“The ball is on the five-yard line and people will make those exotic bets that will be really profitable to the sportsbook operator,” said Rafferty, who lobbied the Nashua board of aldermen to put the sports betting measure on the city ballot. “We’ll provide staffing and cage services and clean the place and include them in our whole marketing. The state wants the marketing skin to be localized.

“I was up to my eyeballs in getting it on the ballot,” he added. “I spoke to the aldermen and said it was a good thing to do. I think the two charity casinos in Nashua and the charities will benefit greatly. Some aldermen were concerned that none of the proceeds would go to charity, but I think it doesn’t matter because it will bring people here to play roulette and other games that do contribute to charity.”

New Hampshire has a different attitude toward taxes than most states—it generally dislikes them. It has no sales tax or income taxes, although its property taxes are high compared to most states. But its residents do like buying lottery tickets and financing things with lottery profits. So squeezing money out of sportsbook seems just like the winning ticket to residents of the Granite state.