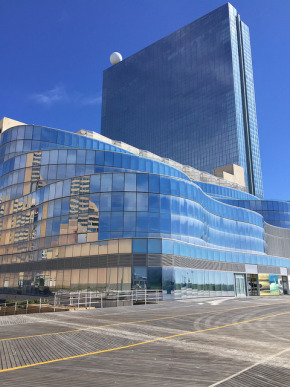 Luxor Capital Group, owner of Atlantic City’s Ocean Casino Resort (l.), has been approved to own the property. The hedge fund turned the property around by reducing debt, changing management and renovating the building to promote the casino.

Luxor Capital Group has succeeded where others failed: generating a profit at Ocean Casino Resort, the beleaguered Atlantic City property formerly known as Revel. Luxor also lowered Ocean’s debt and improved its finances. These successes went a long way in persuading the New Jersey Casino Control Commission to grant final authorization for the New York hedge fund to own a casino.

“There’s no doubt this property has turned around in so many areas,” Commissioner Alisa Cooper said.

As Revel, built during the nadir of the Great Recession, the gleaming Boardwalk tower went bankrupt twice, and closed in 2014. Colorado developer Bruce Deifik bought it in January 2018, reopened it that summer, and then ran out of money. Luxor, one of his lenders, assumed ownership of the casino in return for canceling the debt, according to the Associated Press.

In February 2019, Luxor put $70 million into the casino, including $50 million to pay down debt. It brought in a new management team, one with experience in the Atlantic City market. Just as important, Luxor corrected flaws in the original building, including a confusing casino floor layout. It added safety panels to an accident-waiting-to-happen escalator that took visitors to the casino floor.

Most of all, the casino got rid of Revel’s emphasis on the property as a resort destination that just happened to offer gambling.

Until the coronavirus pandemic, the results spoke for themselves.

“Ocean was self-sufficient,” said Michael Conboy, a Luxor partner. “Our budget for 2020 showed the company covering its expenses and generating free cash flow beyond that. We can debate what will happen when the city opens up. Long-term, the trajectory is still as positive as it was in February, when it was incredibly positive.”

In a presentation to the commission, casino executives said they increased revenue while decreasing expenses, “the hardest combination to achieve in business,” according to Terry Glebocki, Ocean’s CEO.

Once the Atlantic City casinos are given permission to reopen, Glebocki said, Ocean plans to open an additional 12 floors of its modernistic hotel tower. But the casino will temporarily suspend plans for new high-limit slot and table games lounges.