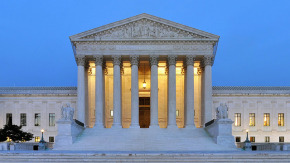 With lawyers gearing up for this fall’s pivotal battle before the U.S. Supreme Court over the federal ban on sports betting, the casino industry’s D.C. lobbying arm has fired off another salvo at the ban, blasting it as a “failure” and blaming it for fostering a massive “black market” in unregulated betting.

“The harm of such federal overreach is more than purely structural,” said Stacy Papadopoulos, senior vice president of the American Gaming Association and the trade group’s general counsel.

In a recent post on SCOTUSblog, Papadopoulos said, “Preserving a state’s autonomy to enact, enforce, modify, and repeal its own laws as it sees fit protects individual rights and promotes democratic accountability.”

She claims the federal law―the 1992 Professional and Amateur Sports Protection Act, or PASPA―has ”fueled a thriving black market” that includes an “estimated 97 percent” of all bets on the Super Bowl and NCAA men’s basketball tournament, when Americans bet a total of about $15 billion.

“In Nevada, for example, where betting is legal and regulated, the demand for illegal bookmakers is practically nonexistent. So, as far as protecting players goes, the act fails completely,” she said.

She added, “PASPA also fails in another important element, which is protecting sporting events. In regulated betting markets, irregular betting partners and other shady activities are easily noticed. In the black market atmosphere, it is basically impossible to notice such activities.”

But it’s the “federal overreach” argument that appears to have resonated with the conservatively led high court, which agreed to consider New Jersey’s case against the ban over the objections of federal government lawyers and the NCAA and the major professional sports leagues and despite a string of U.S. District Court and Court of Appeals rulings upholding PASPA’s constitutionality.

Which is the core issue in Christie v. NCAA and New Jersey Thoroughbred Horsemen’s Association v. NCAA, which the Supreme Court has consolidated into one case―whether PASPA violates the 10th Amendment separation of powers between Congress and the states.

Spearheaded by then-U.S. Senator Bill Bradley of New Jersey, who feared a corrupting influence on sports from the spread of legal betting, PASPA made it illegal for states to “operate or authorize” a “lottery, sweepstakes or other betting, gambling, or wagering scheme based, directly or indirectly” on a competitive game featuring amateur or professional athletes. The act gave states a year to legalize betting within their borders if they chose, but none did, including New Jersey, whose casinos opposed sports books at the time as a competitive threat. The result was that the activity has remained legal in various forms, but only in the four states―Nevada, Oregon, Montana and Delaware―where it was regulated when the act passed.

That all changed a decade ago when the twin blows of the Great Recession and land-based competition in neighboring states sent the Atlantic City gambling market into a tailspin from which it never recovered. Sports betting suddenly loomed large as a potential profit center, and after several anti-PASPA legislative efforts failed to gain traction at the state level, in 2011, New Jersey voters approved amending the state Constitution to allow it. The legislature legalized it the following year. But the law was challenged in federal court by the NCAA and the major pro leagues and was shot down. The legislature then tried to circumvent PASPA by essentially repealing the state’s own betting ban. That also was dashed by the courts.

The argument the Supreme Court will consider is whether New Jersey Gov. Chris Christie and the Horsemen’s Association are right and PASPA represents a “dramatic, unprecedented” takeover of the state’s authority in direct violation of the 10th Amendment protection of states’ rights.

The argument, as framed recently by West Virginia Solicitor General Elbert Lin and Deputy Solicitor General Thomas M. Johnson goes that: “Congress can no more mandate that states not repeal or modify certain existing gambling laws than it can dictate to states how they must regulate radioactive waste or obligate state law enforcement officers to conduct background checks. (Congress) cannot simply commandeer state law to carry out federal policy the way that (the gambling law) does.”

Opponents, on the other hand, question why the court has even agreed to hear the case.

“PASPA’s prohibitions plainly do not require the legislating state either to act affirmatively or to expend resources or reputation by regulating a federal program,” said Michael Fagan, an adjunct professor of law at Washington University and coordinator of the Predatory Gambling Liability Project. “Unless at least five members of the Supreme Court seek to markedly expand or modify the anti-commandeering doctrine, it is difficult to see why the court granted certiorari in this case, in which the primary issues are clearly political, not constitutional.”

SCOTUSblog’s Amy Howe wrote, “The justices often grant review to resolve differences in opinion among the federal courts of appeals. However (as the leagues emphasized in urging the court to stay out of the dispute), there is no such division in this case and―when asked by the Supreme Court to weigh in―the federal government (whose opinions the justices take seriously) recommended that review be denied. The fact that the Supreme Court nonetheless agreed to take on the case suggests that at least several justices regard the 10th Amendment issue as an important one.”

No date has been set yet for oral arguments, but the case is expected to be one of the most significant in the court’s coming term.

As Lin remarked, Christie v. NCAA has the all the “markings of a sleeper blockbuster.”