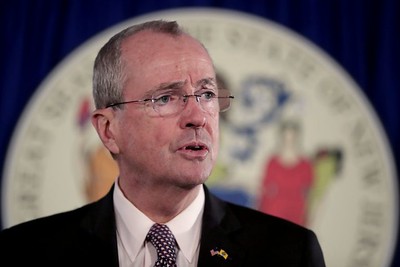 Governor Phil Murphy (l.) approved the return of smoking on portions of the casino floor September 1, triggering a backlash from health experts who said smoking indoors could exacerbate the spread of Covid-19. Murphy rescinded his order.

On September 4, the day smoking was to be permitted inside Atlantic City casinos, New Jersey Governor Phil Murphy ordered a ban on tobacco use.

“I am announcing we will take administrative action to prohibit smoking in indoor casinos. We have looked closely at the science and agree with experts that have concluded that allowing smoking is too large a risk to take,” Murphy said.

The September 1 decision to permit smoking received backlash from health groups who suggested secondhand smoke could spread the coronavirus, according to NJ.com.

Atlantic County Democratic Assemblymen Vince Mazzeo and John Armato cheered the news, according to the Press of Atlantic City.

“As we work to combat the spread of a virus that’s easily transmissible through the air, temporarily banning smoking in casinos is the best decision for the safety of workers and patrons alike,” the two said in a written statement. “Prohibiting smoking will make it easier for casinos to filter clean air, which experts agree is key to slowing the virus’s spread in indoor spaces.”

By local ordinance, casinos are allowed to have smoking on 25 percent of the gaming floor.

A 2008 Atlantic City visitor profile survey—the most recent— said 23 percent of customer smoke, according to Spectrum Gaming Group. A CDC study in 2018 estimated some 14 percent of Americans smoke.

Global Advisors on Smoke-free Policy and the Smoke Free Atlantic City Coalition were among the groups who recommended retaining the smoking ban.

State Senator Joseph Vitale, chairman of the Senate Health, Human Services and Senior Citizens Committee mentioned an article in which doctors explained the possibility that particles from an exhaling smoker’s mouth could carry the virus.

“As indoor dining is set to resume in a limited capacity, I appreciate the Governor’s ban on smoking inside casinos. I am pleased he acknowledged the science and listened to those of us concerned with how smoking indoors would accelerate the spread of Covid-19,” Vitale said.

Vitale said he will amend a bill he introduced to phase out smoking altogether in casinos.