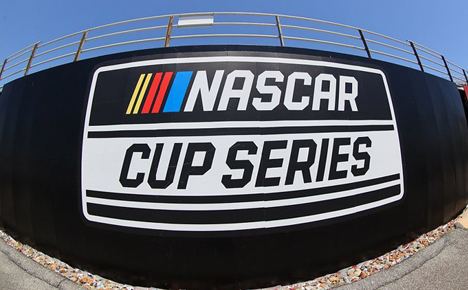 The NASCAR Cup Series Championship starts Sunday at Darlington Raceway, with 16 drivers going for the crown. Kyle Larson is the current favorite.

NASCAR’s regular season concludes at Daytona on Saturday, with the Cup Series Championship set to begin Sunday at the Cook Out Southern 500 at Darlington Raceway. Sixteen eligible drivers will compete over 10 races to crown the champion.

Kyle Larson won the regular season and is ranked No. 1 going into Darlington. Not surprisingly, the Hendrick Motorsports driver is the favorite to win the cup, as well as the Cook Out 500 at most sportsbooks. He’s fetching +240 odds to win the Cup at BetRivers, with Chas Elliott a distant second at +650. At Darlington, Larson is +350 to win, while Martin Truex Jr. is next at +650.

The NASCAR playoffs begin with 16 drivers competing at three races (Darlington, Richmond and Bristol) over the next three weeks. The bottom four after Bristol are eliminated, and the Round of 12 begins at Las Vegas Motor Speedway. Talladega and Charlotte follow and another four drivers are eliminated.

The Round of 8 will start at Texas Motor Speedway on October 17. Kansas and Martinsville will host a race to get to the Championship 4. A one race, winner take all among those four drivers will decide the champion on November 7 at Phoenix Raceway. 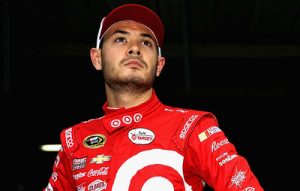 Coming into the playoffs as the top-ranked seed, Larson is optimistic about his chances. The 29-year-old has five cup victories this season, in Las Vegas, Charlotte, Sonoma, Nashville and Watkins Glen. He also has 14 Top 5 finishes and 18 Top 10 finishes.

With two of his five victories at tracks that will host playoff races, he’s confident he will be victorious come November.

“I think there’s a lot of good tracks for us,” Larson said. “I feel like we have a shot to win anywhere right now. That’s encouraging.”

The only negative” it’s difficult to win the NASCAR regular season and the Cup Championship in the same season. Since the playoff format was tweaked four years ago, only two drivers have won in the same year: Truex Jr. in 2017, and Busch in 2019. Larson doesn’t seem too worried.

“I really just look forward to getting it started next week, kind of getting into the flow of that, racing in the playoffs against multiple other drivers chasing points and wins,” he said. “Yeah, I feel good about it.”

One driver to look at—someone who’s not a favorite—is Ryan Blaney. The 27-year-old Team Penske driver has won his last two races and is ranked second in the cup standings.

Blaney is a +1200 to win the Cup, behind five other drivers. Going on a two-race victory streak is important, he said. “Momentum is what everything is all about, so I look forward to getting to Darlington. It’s a great way to end the regular season, but we’ve still got work to do.”

Join Unibet Sportsbook today. Once you add funds, Unibet will insure your first cash bet up to $500 back if you don’t hit a winner. 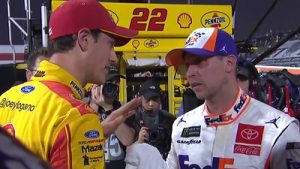 One storyline for the playoffs is the return of the Joey Logano-Denny Hamlin feud. The latest episode happened last weekend at Daytona.

“We had a shot to win there,” Logano griped after the race, “and the 11 just threw a late block and fenced me and then I had a right rear down. Luckily, I didn’t take out the whole field that time.”

The two have history that goes back to 2013 and in 2019, they tangled at Martinsville. Asked Saturday if the hard feelings will carry over into the playoffs, Logano said, “Absolutely.”

Hamlin is ranked seventh in the NASCAR Cup Series Playoffs, and Logano is right behind him at ninth. Hamlin is at +750 at BetRivers to win, with Logano at +1200.

Watch the NASCAR Cup Series on NBCSports.com and the NBC Sports app, or on YouTube with a free trial subscription. For a complete schedule, click here.