Four NBA teams are vying to play in the 2022 NBA Finals. Which ones will go on to the big show starting June 2?

Four NBA teams are vying for the right to play for the 2022 Championship: the Miami Heat, Boston Celtics, Golden State Warriors and Dallas Mavericks. Which team will represent the Eastern and Western Conference in the NBA Finals starting June 2?

How They Got Here 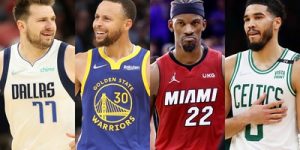 The Heat and the Celtics are the Top 2 seeded teams in the Eastern Conference. The Heat took care of the Atlanta Hawks in five games and the Philadelphia 76ers in six games. The Celtics dominated the Brooklyn Nets in four games and went seven in defeating the Milwaukee Bucks. The Bucks were without All-Star guard Kris Middleton for the entire series.

The Warriors and the Mavericks were the second and fourth seeded teams in the Western Conference. The Warriors handled the Denver Nuggets 4-1 and the Memphis Grizzlies 4-2. The injury to Ja Morant impacted the series against Memphis. The Mavericks surprised the Utah Jazz winning 4-2. Luka Doncic missed the first two games in that series. The Mavericks outlasted the top seed Phoenix Suns in seven games, winning game seven on the road by 33 points. 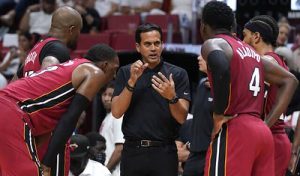 Miami Head Coach Erik Spoelstra gets the edge over Boston Head Coach Ime Udoka. Spoelstra’s won two championships and made four trips to the NBA Finals. Golden State’s Steve Kerr has the advantage over Mavericks Head Coach Jason Kidd. Kerr has won three NBA titles and been to the Finals five times. And he was on the staff when the Los Angeles Lakers won the title in 2020 in the bubble. 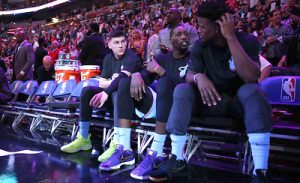 The Celtics won the regular season series over the Heat 2-1. One of the losses was a game that Kyle Lowry, PJ Tucker and Jimmy Butler all missed. Miami has the homecourt advantage in this series. The Celtics are the betting favorite against the Heat with a price of-165 to win the series. The Heat are +145. The Heat was the top team in the league shooting three-pointers. Boston was the top-ranked team in the NBA on defense, while Miami finished fourth.

Hey hoops fans, get a $250 deposit match when you sign up to wager at BetRivers. Register your account today! 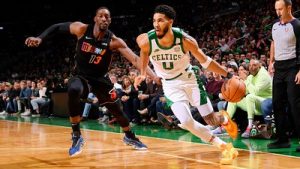 The Prediction: Boston has more weapons than the Heat. The Celtics will play fast and run off every opportunity. This will negate the defensive schemes of the Heat, because Miami excels when they play half court. Boston plays exceptional defense and should control Tyler Herro and Max Strus, Miami’s three-point shooters.

Miami defeated Boston two years ago in the bubble in the conference finals. The Celtics played poorly in the fourth quarter of two of their losses in that series. Not this time. Boston wins this series in six games. 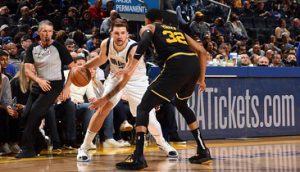 The Prediction: The Warriors lost during the regular season to the Denver Nuggets and the Memphis Grizzlies. Golden State defeated both of those teams to get here. The Mavs won the regular season against the Warriors. I see a pattern on this journey for Golden State. The Mavericks are playing defense at a rate that’s better than their regular season numbers. They lead all Western Conference teams by allowing only 101.9 points per game.

The veteran leadership of Green, Thompson and Curry along with the addition of Andrew Wiggins and Jordan Poole make this contest a daunting one for the Mavs. The Warriors won’t allow the isolation with Jalen Brunson. While I expect Spencer Dinwiddie to play well, I don’t see a 30-point explosion like his performance against the Suns in game seven. Luka will get big numbers, but the Warriors win in six games.

Get NBA Playoffs Overtime Insurance at BetMGM! Place a moneyline wager on any playoff game. If your team loses in OT, you’ll get your stake back in Free Bets up to $25.