Want an underdog to walk off with an NBA award this season—and get a big payout too? Here’s your guide on who to take in each race.

After seeing Nikola Jokic (MVP), Julius Randle (MIP) and Jordan Clarkson (6MOY) take home hardware at the end of the last NBA season, it’s clearer than ever that underdogs can win these individual awards. Get a jump on the season with these NBA future bet value picks, and make some money in the bargain.

He was edged out by fellow center Jokic for the league’s most prestigious award a season ago. That makes the Philadelphia 76ers’ Joel Embiid more motivated than ever to assert his dominance on the league and get his team to the NBA Finals. Embiid also finds himself in a strange situation with teammate Ben Simmons possibly holding out/facing suspension to begin the season. With Simmons out of the picture for now—and possibly for good—No. 21 will carry even more of a load for the Sixers. Expect career highs (or close to it) across the board yet again for the rising NBA superstar. 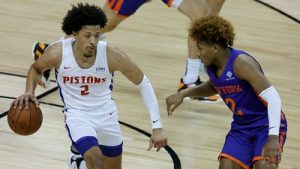 This isn’t much of a value pick at +275, but Rookie of the Year will be a two-horse race, with the Detroit Pistons’ first overall selection, Cade Cunningham, now the second-best horse on the board. The Houston Rockets’ Jalen Green sits in the top spot at +240 odds to take home the ROY. But Cunningham is a rare prospect, in that he has great size at the guard position, is athletic, and really does everything well. He’ll put up significant numbers in multiple statistical categories this season to go with what should be a better team than Houston’s. And that’s a recipe for Cade to win this award.

The reigning Finals MVP is at the top of the basketball world right now, and is a scary talent for the rest of the league. The Milwaukee Bucks’ Giannis Antetokounmpo won DPOY just two seasons ago and puts up tremendous defensive stats year in and year out. At +850, this is a no-brainer for a guy who will be a candidate for this award most of the seasons in his career.

Join Unibet Sportsbook and get started on your NBA betslip. Once you add funds, your first cash bet is insured up to $500 if you don’t hit a winner.

There are a couple of encouraging reasons to take the young Golden State Warriors guard Jordan Poole to be the league’s best reserve this season. First, he’s coming off a preseason in which he averaged nearly 22 points per game. He’s growing into his potential rapidly, and should put that on full display this season. Also, Poole will be in the starting lineup with Klay Thompson still expected to miss a couple months due to injury. Poole could use those starting minutes to make a real name for himself. If he continues to impress when he transitions into the sixth man role, he’ll have as good a shot as anyone to take home this NBA award.

The Memphis Grizzlies’ Jaren Jackson Jr. is coming off a season where he missed a lot of games due to injury. He still scored a big payday, as he agreed to a four-year extension to stay in Tennessee. With better health and the confidence of a large contract under his belt, Jackson Jr. is in line to have a breakout NBA season. The Grizzlies are a team to watch in the West this season, and with JJJ playing a major role, expect him to be part of this conversation all season long.

With the NBA regular season finally at the tipoff, we’re in the best time of year for sports in America. Every major sport is in action at the same time—so not a dull day for the next several weeks. Enjoy all the action and make sure you get in on some of your own, including some NBA future bets.