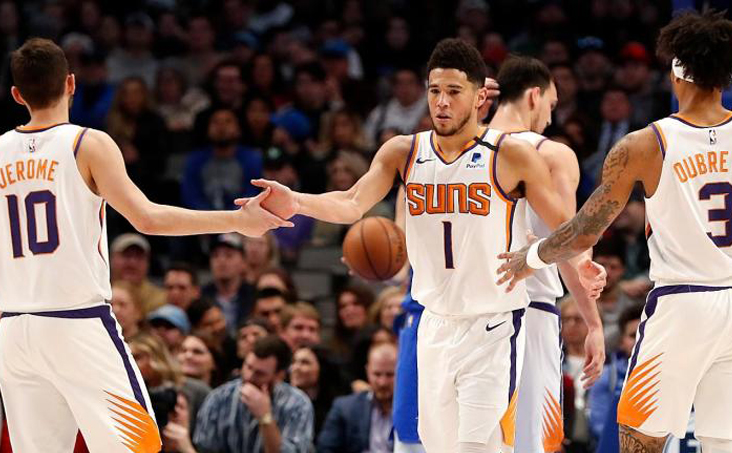 With an exciting slate of hard-court action in the offing, let’s forecast some winners for the upcoming NBA weekend in this moneyline guide.

Now that NBA teams are seven or eight games in, fans have a feel for the league’s contenders—and also the pretenders.

Let’s call some winners for the upcoming NBA weekend. Spreads aren’t available now, so call this one your moneyline guide.

The Phoenix Suns have a good roster, and have been playing solid basketball so far this season. The same can’t be said about the Detroit Pistons. Detroit is just too crowded in the front court, with way too much inexperience at guard.

On the Money: Chris Paul and Devin Booker will be salivating at this matchup. They should work together toward a pretty easy W.

The Charlotte Hornets have an oddly composed roster. You could make the argument that their three best players are all point guards (Terry Rozier, Devonte Graham, LaMelo Ball).

The New Orleans Pelicans, on the other hand, have the most exciting up-and-coming squad in the league. The team’s starting five players work well off each other. The bench brings some nice scoring reinforcements to take the load off the starters.

On the Money: In such a good matchup, expect an easy New Orleans win at home.

This will be the second of two straight matchups between the Los Angeles Clippers and the Golden State Warriors (the first was Wednesday night).

Los Angeles is extremely inconsistent and lacks identity, while Steph Curry is playing like Steph Curry again. Steph will continue to build on his recent 62-point outburst and elevate his beaten-up squad.

On the Money: The Clippers seem to be the pick on paper, but this one favors the Dubs.

The Philadelphia 76ers currently own the best record in the NBA. At least for now, it looks like Daryl Morey’s moves in his first off-season as Sixers’ president of basketball operations have gone according to plan. Meanwhile, the Denver Nuggets have been struggling to win ballgames early, and that kind of slide is hard to overcome.

Joel Embiid usually plays Nikola Jokic tough, and Ben Simmons should neutralize Jamal Murray. Unless these two are playing at a high level, the Nuggets won’t get much going.

On the Money: Look for this one to go the Sixers’ way.

Cash Out early on NBA Spreads and Totals at PointsBet.com. You can settle your bet and collect some of your winnings early if a bet is winning, or settle a losing bet and salvage some of your stake.

Right now, Boston Celtics Jayson Tatum and Jaylen Brown are playing the best basketball of their young careers. Boston couldn’t have asked for more, as these two seem to be winning games on their own, independent of the team. The Miami Heat came out of the gate with a little inconsistence—no surprise, following their recent NBA Finals appearance.

On the Money: The Cs just seem to have more going for them right now, and on this NBA weekend, should be able to get this win at home.

Register a new account at WilliamHill.com. If you lose your first bet, you’ll earn a Free Bet in equal value up to $500! Free Bets must be used within seven calendar days from the date they are awarded.

It’s the Lakers. Enough said. The L.A. Lakers are the undisputed best team in the NBA, and this Sunday, will match up against the weirdest in the Houston Rockets.

The Rockets’ roster is extremely talented, but strangely composed. Outside their four main contributors (James Harden, Christian Wood, John Wall, and Eric Gordon), this team doesn’t have much going for it. And where depth is a weakness for one side, it is a strength for the other. The Lakers roster is loaded, top to bottom, and should be able to exploit a weak Houston bench this NBA weekend.

On the Money: Give this one to the defending champs.

While there are plenty more exploitable matchups this weekend, bettors should dive into these. Whether you take the spread or the moneyline, as singles or a big parlay, you can’t go wrong. Use this moneyline guide to your advantage. Enjoy the winners and have a great weekend!

Golf Is Back with th