HomeThe ShuffleNCAA Championship Up for Grabs

NCAA Championship Up for Grabs 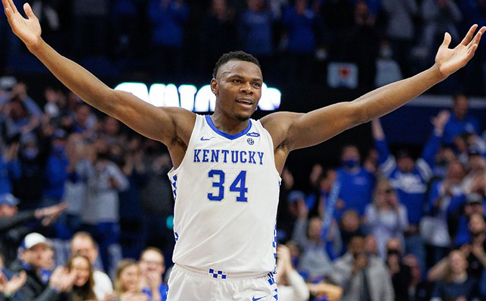 The NCAA Basketball season is here and three experts at BetQL give us their picks of who will make the Final Four and who will win the title.

The NCAA men’s basketball season is a couple of weeks old and already teams are looking like they are ready for March Madness.

The staff at BetQL.com has made some selections for who they think is not only winning the NCAA Championship, but who will make the Final Four. They give their insights below and some tips on betting futures for the tournament.

Last season, Oscar Tshiebwe won the National Player of the Year award and still elected to return to the Kentucky Wildcats to chase a championship and continue his development as a pro prospect. The last time a reigning National POY returned to school, Tyler Hansbrough led the North Carolina Tar Heels to a title back in 2009.

While the Wildcats haven’t won a National Championship since 2012, haven’t been to a Final Four since 2015 and haven’t won an NCAA Tournament game since 2019, this program that went 26-8 last season features upperclassmen in the presumed starting five, which is surprising for a John Calipari team. They include Tshiebwe and SEC assist leader Sahvir Wheeler. It will also benefit from five-star freshmen recruits Carson Wallace and Chris Livingston.

As for the other three teams? North Carolina lost in the championship game and has key stars returning: center Armando Bacot and guards Caleb Love and R.J. Davis. They’ll have to replace Brady Manek, but this team is going to contend once again for Coach Hubert Davis.

Finally, the UCLA Bruins will have one of the best veteran backcourt duos in the nation this year, as Jamie Jaquez Jr. and Tyger Campbell will make life easy for Coach Mick Cronin. Prized freshmen Adem Bona and Amari Bailey should also step in and produce right away for the Bruins. Overall, I’m very high on all four of these programs this year, but love Kentucky to win it all. 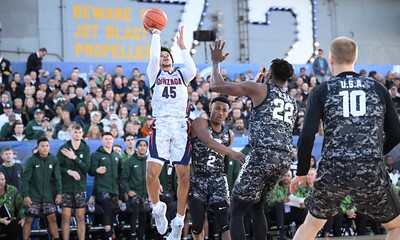 Prior to the season, the Gonzaga Bulldogs, Kentucky, Houston Cougars, and North Carolina were all tied at +330 to make it to the Final Four and I see all four of them making it.

I also think Gonzaga has a great chance to finally win the national championship. They’ve never won a national championship, but they have been to the Final Four twice in the last five tournaments and return NBA draft prospects Drew Timme and Julian Strawther. They came into this season ranked second in the AP Top 25 and I wouldn’t rule them out to dominate this season and finally win that title.

Could Baylor Pull Off Shocker?

Experience is everything when it comes to the NCAA Tournament, and you’ll notice that trend in my Final Four picks.

UNC, of course, was last year’s runner-up to the Kansas Jayhawks and returns key pieces in the frontcourt and backcourt to help them make another deep run.

The Arkansas Razorbacks could be ready to take the next step after losing in the Elite Eight in each of the past two seasons, as they reload a talented roster with two potential NBA lottery picks in SG Nick Smith and point guard Anthony Black, plus Missouri Tigers transfer power forward Trevone Brazile.

But when the confetti settles, I think it’s the Baylor Bears cutting down the nets for the second time in three seasons, possibly even getting revenge on UNC in the title game for knocking them out of last year’s tournament.

After winning the national title in 2021, the Bears (27-7, 14-4 in Big 12 last season) ran into a red-hot Tar Heels team on its way to the national title game. That loss to UNC, especially after an improbable comeback, will fuel an experienced Baylor team to make another deep tourney run this season.

That team, which finished first in the Big 12, will return top scorers LJ Cryer and Adam Flagler, along with super-sleeper Jonathan Tchamwa Tchatchoua, and will add NBA lottery prospect Keyonte George. Coach Scott Drew has all the pieces he needs to make it back to the Final Four –and win—in 2023, so grab these +1400 odds while you can. They’re as low as +1200 at other books, making this look like an even better value.