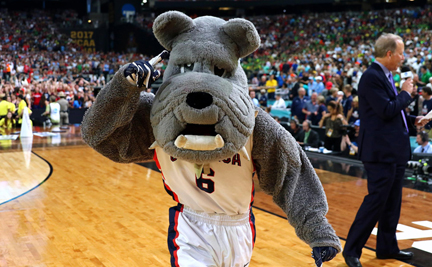 The Gonzaga University Bulldogs are the team to beat in NCAA men’s basketball. How would the other top NCAA basketball teams in the country do against them?

Coach Mark Few and the Gonzaga University Bulldogs seem to be on a different playing field from the rest of NCAA men’s basketball right now. Two 20-point scorers and the best freshman in the nation will do that for you.

It begs the question: Is the margin between the Zags and the rest of the NCAA field really as wide as it seems? It’s time to compare Few’s squad to each team that comes after it in the current AP Top 10 poll.

Baylor has the star power to put up a fight behind one of the best players in the country in G Jared Butler. This team is loaded at guard, but Gonzaga’s strength around the rim might prove too much for Baylor. While Baylor could hang in and even lead for a while, expect the Zags to pull away and take this one. 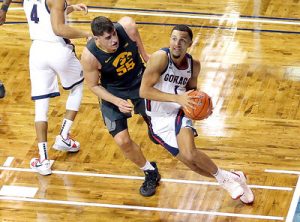 The Kansas Jayhawks are one of three teams on this list that’s already played Gonzaga. On both teams’ opening night, Gonzaga knocked off Kansas 102-90. The Zags were much better prepared, so a rematch would most likely be a much tighter affair. That said, no one seemed to be able to stop the star trio of Jalen Suggs (l.), Drew Timme, and Corey Kispert the first time, so there’s no reason to believe that would change in just a few months.

If any team matches up well with the Zags, it’s the Villanova Wildcats. Senior guard Collin Gillespie provides veteran leadership and an ability to slow down Suggs, while Jeremiah Robinson-Earl and Jermaine Samuels offer the size and rebounding needed to match this team. Versatility and switchability are what you need to beat the Zags, and Nova has both. We can only pray for a national championship game like this one.

At GoldenNuggetCasino.com, sports bettors are eligible for a $100 Risk Free Bet on their first settled bet. If your first bet wins, you win! If you lose, you get your money back as a Free Bet.

While the Houston Cougars love to chuck up three-pointers like Gonzaga, they’re a little less well-rounded in other categories. And in post-season play (assuming a hypothetical matchup would take place in the tournament), shooting can be neutralized, causing other forms of scoring to take place. I just don’t have confidence in this team to score in enough ways, or defend in a way that’s versatile enough, to match up with the Zags. This would most likely be a comfortable win for Gonzaga.

The Wisconsin Badgers are a very “3-and-D”-oriented team, with no big-time scorers or distributers. While it’s a definite plus to be able to slow down Gonzaga’s prolific offensive attack and to be as deep as Wisconsin, this team is still at least a star player away from being able to beat the nation’s top team. It would be a tight contest, and one the Badgers can find a way to win.

Like Wisconsin, the Tennessee Volunteers are a deep, well-rounded team that doesn’t jump off the page at you. The Vols defend well and play within the team concept. While a win over Gonzaga isn’t probable for Tennessee in the near future, things could change between now and March, and this team absolutely has the potential.

Who’s in the mood for great sports betting bonuses? Register your new-player account at WilliamHill.com, and you’ll be awarded a Free Bet of up to $500!

The West Virginia Mountaineers have also played Gonzaga already this year, and came closer to defeating them (87-82) than any other team so far. The Mountaineers rebound very well, and also have the ability to score and distribute. Clearly, they match up nicely with Gonzaga and have almost beaten them already. Even so, this team has the chops, and hopefully will get another chance.

The Iowa Hawkeyes are the third team on this list that have already played Gonzaga, and fell victim by a score of 99-88. While the Zags had no problem with Iowa that day, the Hawkeyes’ C Luka Garza is the nation’s leading scorer, and has the ability to take over a game at any point. Garza by himself is enough reason to give Iowa a fighting chance against Gonzaga, but the shooters around him add even more of a factor. Given a second shot, I believe Iowa would provide a much closer affair, and perhaps even a W.

We’ve seen three of these matchups in NCAA hoops play already this year. Let’s hope for even more. The Gonzaga Bulldogs are so much fun to watch, and a David vs. Goliath dynamic would provide even more of a spark in this college basketball season.

For now, smash Gonzaga’s spreads until they show signs of being human. Until then, enjoy and don’t look back!