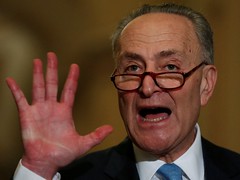 The NCAA's search for best approaches to the expanding legal sports betting market in the U.S. is focused on Washington, where two prominent senators, including Minority Leader Chuck Schumer (l.), are taking up the cause after a prior attempt failed to gain traction.

Betting on March Madness is lucrative for sportsbooks, but if the NCAA has its way, no one will be able to bet on collegiate games.

The National Collegiate Athletic Association is looking for federal legislation on sports betting. Any such move will be met with a legal challenge as a result of the U.S. Supreme Court decision to overturn the sports betting ban last year, but that won’t stop the body from trying to exert its influence on legislation that is now in the early stages of discussion between Senator Chuck Schumer (D-New York) and Senator Mitt Romney (R-Utah), according to ESPN.

The legislation could be similar to the Sports Wagering Market Integrity Act that was introduced in December by Schumer and since-retired Senator Orrin Hatch (R-Utah), but never gained momentum.

The latest version has no timeline.

“We are absolutely supportive of federal regulation,” said NCAA Vice President of Hearing Operations Naima Stevenson Starks, a point person on sports betting. “It’s fairly daunting to think that every state would have a different set of regulations. Having some minimum standards, we are very supportive of and have been an active proponent of.”

Currently sportsbooks operate in 13 states with several more with legislation approved. No state has banned wagering on collegiate sports, although New Jersey does not allow betting on games involving in-state colleges like Rutgers and Seton Hall. The bill introduced by Schumer and Hatch last year did not include a prohibition on betting on college sports.

In the meantime, the NCAA has ramped up educational efforts for student-athletes and referees, who are now dealing with a new landscape, where a legal sportsbook may be operating just down the street from campuses and arenas. Student-athletes have received educational materials and referees given access to an instructional video on best approaches to dealing with sports betting issues. The NCAA also has instituted enhanced background checks for officials.

The NCAA has entered into a formal partnership with an international company to monitor the betting markets domestically and internationally, and an ad hoc committee on sports wagering has been created by the group’s board of governors. In August, the sports wagering committee determined that player availability reporting at this time “would not advance student-athlete well-being nor protect the integrity of competition.”