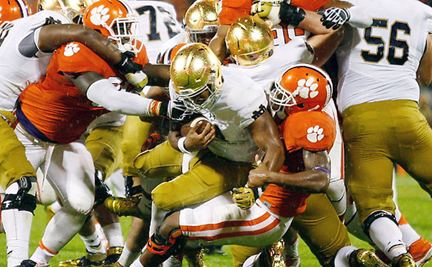 The NCAA Playoffs will be played January 1, with Alabama’s Crimson Tide, the Clemson Tigers, the Ohio State Buckeyes and the Notre Dame Fighting Irish all vying for the championship.

The NCAA Playoffs are set for New Year’s Day. This year’s Final Four includes the Alabama Crimson Tide, the Clemson Tigers, the Ohio State Buckeyes and the Notre Dame Fighting Irish, all vying to become National Champions. Let’s look at their most recent playoff performances and take a glance at this year’s NCAA Playoff Preview.

Alabama returns to the playoffs after a two-year absence. The Crimson Tide won the championship in 2018, defeating Clemson in the semifinal game 24-6 and the Georgia Bulldogs 26-23 for the title. Alabama’s played in four of the last five playoffs and won two championships. Notre Dame was in the playoffs in 2019 and lost to Clemson 30-3.  Clemson’s made the playoffs five straight years and won two national titles. Ohio State is in for the second consecutive year.

Get College Bowl Game Parlay Insurance at PointsBet.com! Place a 4+ leg Parlay on bowl games and get back up to $50 in Free Bets if exactly 1 Leg Fails. Valid through January 2.

Alabama has been beating opponents by an average of 30 points a game. They play in what is considered the best college football conference. Eight teams in the SEC were ranked in the Top 25 at the beginning of the season. Notre Dame’s two signature wins were against North Carolina Tar Heels and Clemson. The 34-17 win over Carolina came after they traded two touchdowns early.  The second game was a 47-40 overtime thriller that QB Trevor Lawrence did not play. Lawrence did play in the rematch against the Irish, and the Tigers got revenge 34-10. Notre Dame did move the ball down the field early in the rematch but only scored a field goal in 3 drives that ended near or in the red zone.

The betting public is influenced by what they see. After the ease that Clemson displayed in handling the Fighting Irish, the line was set at 19.5 and has moved to 20 at some books.

Alabama has a moneyline of -1250. Notre Dame is +600. Unless you’ve got some extra Christmas money, those are bets to avoid. If Mac Jones (l.) is on his game, along with fellow Heisman Trophy candidate DeVonta Smith, this game could get lopsided early. Najee Harris is one of the top rushers in the country on the best passing offense in Bama history. The Crimson Tide is favored by 20, beating teams by an average of 30. That looks like Roll Tide.

Clemson has added fuel to the fire with the comments of Coach Dabo Swinney, who was quoted as saying that if you didn’t play nine games, you shouldn’t be considered among the Top 10 ranked teams. He voted the Buckeyes No. 11. Clemson and Ohio State are in a rematch of last year’s playoff game, which was won by Clemson 29-23. Trevor Lawrence connected on a 38-yard pass late in the fourth quarter to take the lead. Ohio State drove eight plays for 52 yards before Justin Fields threw his second interception, which sealed the game. These teams have played three of the last five seasons.

Don’t miss the daily Odds/Line Boosts at GoldenNuggetCasino.com! Golden Lines are an exciting way to boost your odds on sporting events. Check each day to see what events qualify for boosted odds!

The game opened at Clemson -7 and a total of 65.5. The line movement has inched to 7.5 and 66 at some sportsbooks. Sixty percent of the action is on the Tigers, with 40% on the Buckeyes. Neither team has a good ATS record. Ohio State is 3-3, while the Tigers are 5-6.

The Buckeyes are 20-8 ATS in their last 28 games as underdogs. A more resounding stat has the Tigers a perfect 6-0 as a favorite in their last six neutral site games.

The last five games that Clemson played in the Championship Semi Final game have gone under and the last four bowl games that Ohio State played have gone under. When looking at teams, try to handicap based on stats they share jointly.

The moneyline is Clemson -320 and Ohio State +250. If there’s a play for the moneyline, it would be in this game. The prices are comparable to the traditional gaming bankroll. Justin Fields suffered a hand injury during the Big Ten Championship game and while he downplayed the injury, it clearly affected his performance.

Clemson is coming into the game clicking on all cylinders. Trevor Lawrence performs well in the big games, and this team has big-play capability with Justyn Ross and Amari Rodgers. Travis Etienne is projected to go in the Top 12 picks of next year’s NFL Draft. If Fields were 100%, he could make this game interesting.

Chris Olave and Garrett Wilson are the two wide-out playmakers. Trey Sermon ran for 331 yards on 29 attempts in the championship game against the Northwestern Wildcats. It should be noted that Clemson’s rush defense is outstanding. They allowed under three yards per attempt and 99.8 yards per game.

Are six games enough of a sample to evaluate Ohio State? The Big Ten wasn’t filled with overwhelming competition. The Tigers are battle-tested from the ACC schedule, and ready for a prime-time match up. Clemson is particularly good at in-game adjustments. In most of Lawrence’s games, he’s projected for over 320 yards in passing. This game, his total is set at 339. Etienne’s rushing yards are set at 76.5. These are two prop bets that make the game interesting, regardless of what side you’re rooting for.

The lean here is toward the Tigers. Clemson will move ahead to the championship game on January 11. Alabama and Clemson will square off in a rematch of the 2019 game.

NCAA Playoff Where to Watch:

The third-seeded Ohio State Buckeyes’ rematch against second-seeded Clemson Tigers will kick off at 8 p.m. ET on January 1 from the Mercedes-Benz Superdome in New Orleans, Louisiana. The will be broadcast on ESPN.