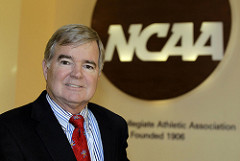 The president of the National Collegiate Athletic Association, which has long opposed legalized sports betting, last week suggested a “carve-out” for NCAA sports in any new laws legalizing sports wagering.

Should the court strike PASPA down, or should Congress pass a law legalizing sports betting on the federal level, states would be free to pass their own laws authorizing regulated sports betting. Emmert’s suggestion is that when doing so, NCAA games be excluded from any sports betting authorization.

Few believe such a move would be practical, as it would involve the NCAA sending out a fleet of lobbyists to state legislatures debating sports-betting laws.

In a column for USA Today, Dan Wolken wrote why that a carve-out would not be in the NCAA’s interest. “An NCAA carve-out on sports betting would leave all wagering on its games on offshore sites,” Wolken wrote. “A regulated sports gambling market would in fact be better for game integrity than the status quo of a black market the NCAA and others have little insight into. So, the NCAA can lobby all it wants for an exclusion when it comes to sports betting. But that would be a poor decision, both from the perspective of its bottom line and game integrity matters.”