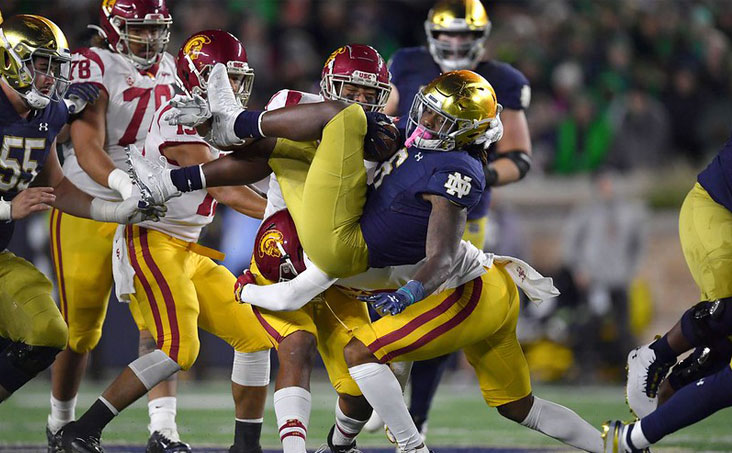 There is a full slate of college football conference championship games this weekend and our NCAAF expert likes three in particular.

Fasten your seat belts. For the first time this season, we’ve got MACtion! in this week’s NCAAF Bets.

We’ve also got a revenge match, one of our favorite teams, and two Heisman Trophy candidates not named C.J. Stroud or Bryce Young featured. After all, it’s hard to feature Stroud and Young when the Ohio State Buckeyes and Alabama Crimson Tide aren’t playing in conference championship games.

And this week’s slate of conference championship games offers up not only the usual three bets, but bettors should take a look at a couple of juicy totals not mentioned here. The Over-51 points in the Georgia Bulldogs–LSU Tigers game, in particular, is worth a glance or six.

Fight On to the CFP

When we last left the Utah Utes and USC Trojans, Utah quarterback Cameron Rising was setting USC’s hopes for an undefeated season on fire, racking up 475 yards of total offense in a 43-42 victory.

That was seven weeks ago. And USC—despite blowing a 28-14 lead to the Utes with its bend-and-break defense—hasn’t lost since.

It’s now USC quarterback Caleb Williams who is setting opposing defenses on fire. That includes the Utes, who Williams lit up for 381 yards and five touchdowns. En route to those five consecutive victories and an impending date at the New York Athletic Club for the Heisman Trophy presentation, Williams has accounted for 22 touchdowns (15 passing, seven rushing), while completing 68.4% of his passes.

The Trojans, meanwhile, are averaging more than 38 points a game in their last six games. Williams’ latent rushing prowess adds another weapon to an arsenal bursting with firepower, one the Utes didn’t have to contend with in their first meeting.

Let’s go back to that first meeting for a moment. Utah needed a successful 2-point conversion with 48 seconds left to outlast the Trojans at Rice-Eccles Stadium, one of the Pac-12’s most notorious dens of iniquity for visiting teams. Utah is 6-0 at home this season, 3-3 away.

The Pac-12 Championship isn’t at Rice-Eccles. It’s at Allegiant Stadium in Las Vegas. It’s easy to find, just follow the conga line of Trojans’ fans heading north out of Southern California. They’re following a team that—having set a four-game losing streak to Notre Dame on fire last week—are gunning to immolate two others. The underdog in this series is 4-0 ATS in the last four and USC is 1-11 ATS in its last 12 neutral-site games.

With a berth in the College Football Playoff awaiting the Trojans with a victory, expect the incendiary Williams and company to set those on fire.

Meanwhile, in Dallas, another stranger to the CFP sits one game and a 2.5-point spread away from the playoff promised land. That’s our old friends, the TCU Horned Frogs, who come into Dallas as 2.5-point favorites against a Kansas State Wildcats team they beat 38-28 back on October 22.

We’ve discussed trap lines before and this one looks like it came straight out of the Acme Co. catalog. TCU is less than a field goal favorite despite: coming in off a 62-14 poleaxing of an Iowa State team that boasted the best defense in the Big 12.

The Horned Frogs also racked up 377 yards against said Iowa State defense. Thirdly, they are bringing a defense that held a team under 20 points for the fourth time this season and finally, they came back from a 28-10 lead by shutting out K-State in the second half.

Despite being 12-0, the Horned Frogs do face a troublesome K-State team standing between them and the CFP. A troublesome Wildcats team that broke in backup quarterback Will Howard since he made his first start against TCU. And since that game, Howard has thrown nine touchdowns to one interception. This adds a wild card to the Wildcats’ heretofore one-dimensional (read, running back Deuce Vaughn’s legs) offense.

K-State is 4-1 ATS in its last five meetings with TCU. But how can you jump off TCU’s bandwagon now? The Horned Frogs are 5-1 ATS in their last six, 5-1 in their last six conference games and 5-2-1 ATS against teams with winning records. Heisman candidate come-lately quarterback Max Duggan (3,070 yards, 29 TDs, 3 INTs, a 171.3 QB rating) has done everything it takes to win in every conceivable way.

We’ll take our chances once again that he and the rest of the Horned Frogs don’t turn into Wile E. Coyote here. 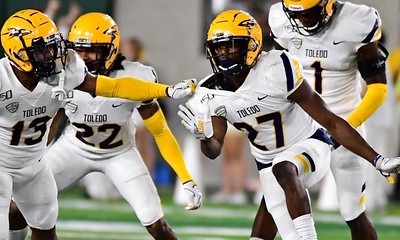 So how did we get the Toledo Rockets playing the Ohio Bobcats for the Mid American Conference title? Who’s navigating this trip? Where did these two come from?

Apparently from the land of broken quarterbacks. Toledo lost Dequan Finn in last week’s loss to the Western Michigan Broncos. The week before, Ohio lost Kurtis Rourke—one of the conference’s best quarterbacks—in a 38-15 beating of the Ball State Cardinals. That leaves MAC matters in the hands of backups Tucker Gleason for the Rockets and CJ Harris for Ohio.

Where does that leave those looking for MACtion? Gleason defines manic-depressive. He threw for 329 yards and ran for 106 yards and two touchdowns against the Bowling Green Falcons two weeks ago. But his two interceptions grounded the Rockets, 42-35, in a game they were favored by 14 points. That was the first of two games Toledo lost as touchdown-or-better favorites. It stumbled in that 20-14 loss to Western Michigan last week.

Ohio, meanwhile, kept its eyes on the prize of a MAC title that has eluded the Bobcats for the last 54 years. The Bobcats turned Harris loose on Bowling Green, watching him run for three touchdowns and throw for a fourth in a 38-14 beat-down.

Toledo has the MAC’s best defense in terms of yards-allowed, surrendering only 337 per game. But we’re into momentum, which the Bobcats have in abundance. They’re averaging a conference-best 34 points a game. Ohio comes in riding a seven-game winning streak and an eight-game ATS streak. They are 5-0 ATS in their last five December games, clearly heading in the right direction in this directional conference.

This line opened Toledo -3.5. It dropped to -1.5 soon after, although you can still catch 2.5 with the Bobcats. Which you should do posthaste as Ohio captures its first MAC title since 1968.