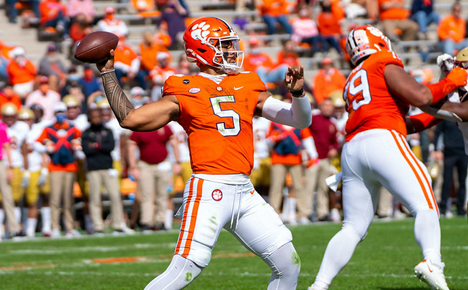 NCAA football season is just around the corner. Which college teams will end as conference champs this year?

The rumor mill is in overdrive about changes coming to structure of the NCAA football conferences. It looks like we may see one or two “super-conferences,” as dominant programs classify together to raise the level of competition.

If you’re a fan of the current setup, with NCAA talent spread out all over the country, enjoy it while it lasts, because things could change in the next couple of years.

But for now, let’s see how the current Power 5 conferences are likely to end this upcoming season.

DJ Uiagalelei should take the country by storm in his first season filling in for #1 overall NFL Draft pick Trevor Lawrence. Expect Uiagalelei to be an instant Heisman Trophy candidate and one of the nation’s top QBs. Moreover, his team is great upfront on defense, and features a solid secondary.

Spencer Rattler looked very effective in his debut season at Oklahoma a year ago, and now he and his top two receivers are back. As a matter of fact, the (also) six-time defending Big 12 champion Sooners are returning most of their team and are one of the few top-end programs in the nation that can say that. They play an extremely favorable schedule and it’s very possible that this team runs the table and ends the season undefeated with a #1 national ranking. The playoffs are looking like a strong likelihood for Lincoln Riley and Co. this year.

Despite the impressive six-peats of the two aforementioned powerhouse programs, Ohio State may have still shown the most dominance over its conference in recent years. The Buckeyes not only won four straight Big 10 titles, they haven’t even lost a single game in the Big 10 East during that span.

The craziest part about this power run is that this conference has arguably been the strongest in the country the past couple of seasons. There’s no reason to assume the pattern will break soon, given the talent level and depth Ohio State will run out onto the field this season.

Of the Power 5 conferences, the Pac-12 has the “little brother” stigma. This one seldom produces a College Football Playoff team, and with the lack of top-tier programs, catches some unwarranted disrespect.

The same reasons people hate on the Pac-12 are why it should be so entertaining this year. There’s no clear-cut favorite, as several teams can make a real push for the title. And while Oregon is the betting favorite, Washington’s returning a lot of starters and runs a smart, practical offense to get the most out of the team’s players. They didn’t get the chance to show their true talent last season, as they only played four games. This Washington team has something to prove, and could sneak its way into a playoff spot.

Sign up to wager at SugarHouse, and your first deposit will be matched, dollar for dollar, up to $250.

After every season, if you did not know better you’d think the world was ending for the Alabama football program. On a yearly basis, Nick Saban loses a majority of his team to the high rounds of the NFL Draft. But every single time, he finds a way to bring back in a national title-contending roster.

This season’s premier adds include redshirt freshman QB Bryce Young and offensive coordinator/ex-Texans head coach Bill O’Brien. This duo will do plenty of damage to SEC defenses all year long. Yes, the Tide will face a couple of early tough tests on the road, but one loss shouldn’t prevent them from taking the SEC and returning to the College Football Playoff.

This season’s playoff field is likely to include the four non-Pac-12 teams on this list. A Clemson-Oklahoma-Ohio State-Alabama playoff would not only be very exciting, it would also be characteristic of the young CFP model. Every year, the four spots are usually filled by the same small collection of teams—and this year doesn’t feel much different.

Take a look at some conference winner futures bets and get them in nice and early! Good luck and enjoy all the anticipation for what should be another thrilling college football season.

Right now, per BetMGM, the Crimson Tide are 5/2 favorites to win the College Football Playoff National Championship, to be played January 10, 2022 at Lucas Oil Stadium in Indianapolis, Indiana. The semifinals will take place December 31 from the Cotton Bowl in Texas and the Orange Bowl in Florida.