HomeThe ShuffleNCAAF: Teams to Bet & Avoid Against the Spread

NCAAF: Teams to Bet & Avoid Against the Spread

In NCAAF Week 8, the Georgia Bulldogs are looking great, along with the Cincy Bearcats and OK Sooners. But who’s your best bet against the spread?

Seven games into the college football season, several teams are starting to distinguish themselves. The Georgia Bulldogs look legit, as do the Cincinnati Bearcats and Oklahoma Sooners.

While these teams are undefeated on the season, they’re not the best squads against the spread. Of the Top 3, Cincinnati has the best record ATS at 5-1. Georgia is 5-2 and Oklahoma 3-4.

No programs are undefeated ATS, but four have a better record than the Bearcats. The Syracuse Orange, Kentucky Wildcats, Bowling Green State Falcons, and University at Texas-San Antonio Roadrunners are all 6-1 ATS.

Four universities are winless ATS. The New Mexico Lobos and Missouri Tigers are 0-7, while the Kansas Jayhawks and Clemson Tigers are 0-6. 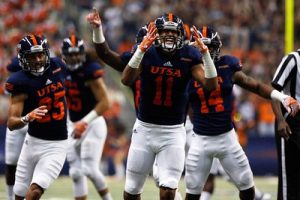 Of the Top 4 teams against the spread, UTSA has the biggest point margin, covering an average of 8.4 points per game. The biggest spread differential was last week, against the Rice Owls. The Roadrunners were favored by 17 and won 45-0, easily covering by 28. Their only blemish was a seven-point victory when they were favored by 21.5.

The blowout victory against Rice moved the team to 7-0 and they are now ranked No. 24 in the AP Top 25 College Football Poll.

“It was by far the best game we played in all three phases and [I’m] really, really proud of my kids,” said UTSA Head Coach Jeff Traylor after the rout of Rice.

The secret might be out with the Roadrunners. They travel to play the Louisiana Tech Bulldogs on Saturday, and the line has moved from its opening -5 to -7 at both Caesars Sportsbook and PointsBet.

Syracuse Wins Even When It Loses 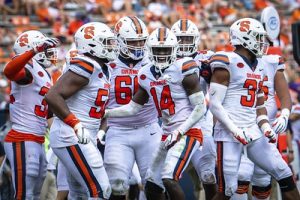 Syracuse might have a 3-4 record, but the Orange have covered in three of those four defeats. Their only loss ATS was against the Rutgers Scarlet Knights in the second game of the season. The Orange were a 2.5-point underdog, but lost 17-7.

Other than that misstep, Syracuse has been money ATS. They are covering an average of 7.9 points. Last Friday, they faced Clemson and were getting 13.5 points. They lost to the Tigers, 17-14.

This Saturday, they travel to face the Virginia Tech Hokies. The line actually moved in the Orange’s favor. It opened at 4, but was bet down to 3 at BetMGM.

Look for Teams That Cover Big 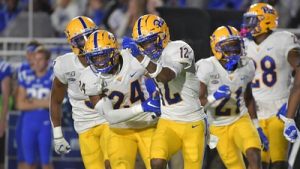 Some teams don’t have the ATS record of Syracuse, Kentucky, Bowling Green State and UTSA. But sometimes when they cover, it’s by double digits.

The biggest point spread winners are the Pittsburgh Panthers. They’re 5-1 ATS, and are covering at an average of 12.8 points. In their game against the New Hampshire Wildcats, they were favored by 30, and won 77-7.

This Saturday, they host the Clemson Tigers, who are 0-6 ATS. The Panthers opened as three-point underdogs, but it was quickly bet in Pittsburgh’s favor, and now they’re laying 3.5 points.

Another team that likes to win big is the Georgia Bulldogs. The No. 1 team in the country is 5-2 ATS, but has an average of 11.9 points. The Bulldogs won three games by 20 or more points ATS. 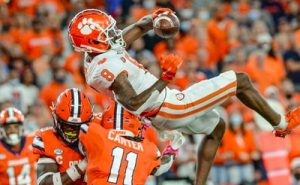 While there are plenty of teams that have success ATS, there are others to steer clear of. Of the four teams that are winless ATS, Clemson is the worst. The Tigers, who are 4-2 on the season, are 0-6 ATS. They’re averaging a -11.8 in their games against the number. The biggest bust was when they were 10.5-point favorites against the North Carolina State Wolfpack and lost outright 27-21.

The New Mexico Lobos aren’t much better, being 2-5 on the season and failing to cover the spread all year. The Lobos are running at a points margin deficit of 10.9. The team faces the Wyoming Cowboys this Saturday as a 20-point underdog.

The Missouri Tigers are another team with a double-digit negative point margin. The Tigers are failing to cover the spread by an average of 10.1 points in the seven games they have played so far this season.

There’s a ton of NCAAF action this week and all weekend long. Here are the games to watch, and where (all times ET).