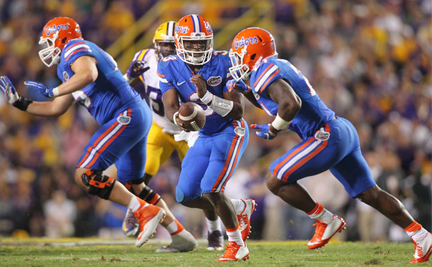 Who do you like in college football this weekend? There are plenty of great matchups in the pipeline—Cougars vs. Broncos, Wolverines vs. Hoosiers, Gators vs. Bulldogs. Let’s run down your best bets.

It’s the most bittersweet part of the sports calendar year. Every major American sport is done for the season, with the exception of football, the favorite of most American sports fans, and especially bettors. Let’s enjoy it while it lasts, and look ahead to this weekend in college football.

This Friday, ninth-ranked BYU and its star junior QB Zach Wilson will look to expand on a surprisingly dominant season when they head into Boise and the Broncos’ blue turf. While Boise State has enjoyed a strong 2-0 start and finds itself in the Top 25 this week, BYU has been magical—and against the spread, at that. A field goal seems like a minimal challenge for BYU to cover, so expect them to do just that.

Indiana’s early claim to fame (and the #13 spot in the nation) was its close opening-night win against Penn State’s Nittany Lions. The Hoosiers were able to take the late lead on a two-point conversion, which was reviewed for a minute or two before standing as called. Michigan, on the other hand, just suffered a bad loss to the Michigan State Spartans in their second game. If these two outcomes had been flipped (Indiana 1-1 and Michigan 2-0) the spread would probably be Michigan -10 or so. Instead, Indiana finds itself favored by 3.5, and I just can’t see them winning the game outright, let alone by over a field goal. Give me Michigan on the road this week.

One of college football’s greatest rivalries is back, with the Florida-Georgia game, and this year’s installment should be one of the best. Both teams have one tough ranked loss and are in the Top 10 for this neutral-site battle. The game truly could go either way. In a big one like this, I’m going with the star senior QB in Kyle Trask. Look for him to lead his team to victory (or at least a cover). Give me the Gators on Saturday.

Place a pregame, full-game point spread wager of $50 or more on Michigan/Indiana, Michigan State/Iowa, or Maryland/ Penn State, for a $7 Free Bet for each TD of 10 yards or more at WilliamHill.com.

Surprisingly, Cincinnati has been one of the best teams in college football so far this season. The Bearcats feature a very well-rounded, efficient offensive attack and a defense that clamps down specifically on the run. If Houston, which struggles to run the ball effectively, gets completely one-dimensional on offense by trying to throw every down, Cincinnati should have no problem here. And I think that’ll be the case. Cincy should just be too much for the Cougars this week—two touchdowns too much, to be exact.

I know I predicted earlier that UF-UGA could be the most exciting game of the week, but Clemson-Notre Dame definitely is the biggest game, with the biggest post-season ramifications. Clemson superstar QB (and future NFL #1 overall pick) Trevor Lawrence missed last week’s game, and will do so again this week due to a positive Covid-19 test. That means Clemson must turn to top recruit and true freshman QB DJ Uiagalelei for its most important game of the regular season. This might have worked last week against the Boston College Eagles, but you can’t hide a true freshman QB against the Fighting Irish. This team is very strong, and senior QB Ian Book seems like he’s had it with not qualifying for the playoffs. While there’s still an ACC Championship game to be played in about a month, this is Notre Dame’s temporary ticket to the dance, if Book can punch it. And I think he can, so the +5.5 will be some nice insurance.

The NFL Single-Game Parlay is now at PointsBet.com! Parlay items such as the spread, over/under, player props, team points, and way more! Get the newest version of the PointsBet app to take advantage!

Stay tuned for the most exciting week so far of the 2020 college football regular season. There are ranked matchups galore, and even where there aren’t, you’ll find solid head-to-head encounters. This could be a premier week for live betting if these close matchups start out not so close. Stay active, and good luck!