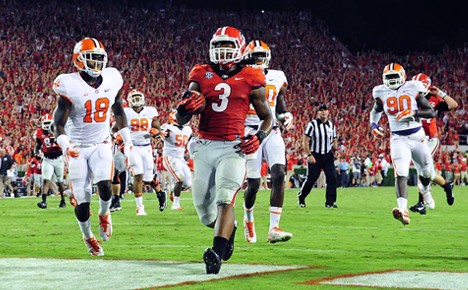 The 2021 college football season is starting to wind down. With playoff/bowl implications looming, which teams will rise in this crucial week?

Two weeks into the NCAAF Playoff rankings, this season is starting to get real. Playoff contenders are dwindling, and conference races are heating up. The last few games are more meaningful than any other this season. So how will contending teams finish?

The Utah Utes have won two consecutive games in blowout fashion, earning them a #24 next to their name. Now the Utes have to prove they belong as a ranked NCAAF team in their meeting with another prime blowout candidate: the Arizona Wildcats, fresh off their first win of the season, 10-3 against the California Golden Bears.

Otherwise, it’s been a long season of blowout losses for the Utes, but after getting a win out of their systems, you can expect more of the same this weekend. They are totally able to cover a 24-point spread. And who better to do it against than this Arizona team?

Get a 20% Parlay Profit Boost on NCAAF games, this Saturday at PlaySugarHouse! Check for new Profit Boosts every week.

After spending most of last year ranked (and pretty highly at that) in the NCAAF, the Coastal Carolina Chanticleers have managed to stay out of the national spotlight for most of this season. Now, with star QB Grayson McCall likely out for the season, it looks like they’ll stay that way.

That said, this has been a consistently solid football team for a few years now. The McCall injury has knocked them out of the Top 25 and down a few points on this spread, but CCU is worth a shot this weekend.

At Resorts Casino, you deserve a winning score. That’s why you get a percentage of cash back on monthly sports losses up to $10,000.

The Georgia Bulldogs have won every single game this season (since Week 1’s 10-3 W vs. Clemson) by what you could classify as “a lot to a little.” A combination of an efficient offense and historically dominant defense has made the Bulldogs’ last eight games easy victories.

The Tennessee Volunteers are solid, but they’ve been blown out a few times already this year. Expect Georgia to win by another score line, along the lines of 31-6.

Betting the Bulldogs? Join Unibet Sportsbook today, and your first cash bet is insured. Get up to $500 back if you don’t hit a winner.

Yet again, the Ohio State Buckeyes are enjoying a likely NCAAF Playoff-bound season. This team has been in great form since losing Week 2 to Oregon, but their margins of victory have been getting tighter in recent weeks as Big 10 opponents improve.

The Purdue Boilermakers have already beaten two Top 3 teams outright this season, and now want to add a #4 to that list. Even if they can’t pull it off, 20 points is way too many for this competitive of a team to lose by in an important conference matchup.

The Charlotte 49ers have struggled the past few weeks, dropping two straight in blowout losses before bouncing back last week with an overtime win over Rice. By comparison, Louisiana Tech makes the Niners’ struggles look miniscule. The Bulldogs have only won two games this season (by three and seven points) and have lost the remaining seven, including the last five in a row.

The Bulldogs might be home, but they’re still bad. And even if they get their third win of the season, it will be close. In this one, take the winning team getting points against a bad team.

As the season winds down, each team’s postseason aspirations hang in the balance. Enjoy the high-intensity football and good luck with those betslips.

Go ahead, root for the home team. You’re covered with College Football One-Game Parlay Insurance (up to $50) at BetMGM!

Know the signs of problem gambling, in yourself or in a loved one. For more information, click here.

Give Thanks for Grea