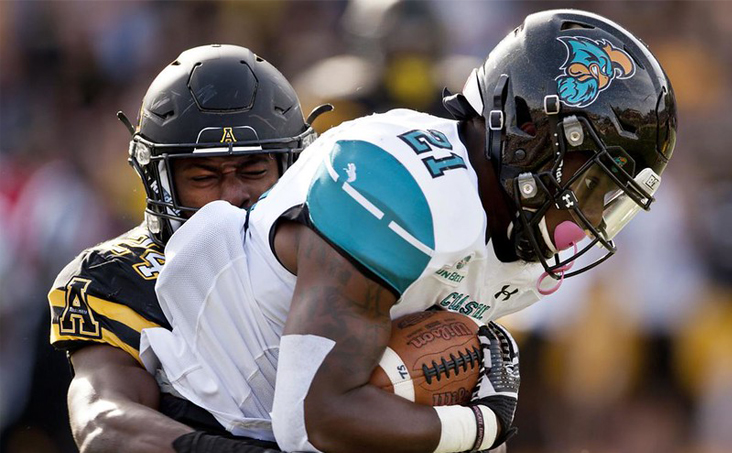 Week 12 of college football is here and so are our bets for the week. Let’s take a look at some of the best spread bets to jump on for this Saturday’s CFB slate.

In this strange 2020 college football season, there are multiple new faces in the Top 25 that we’re not accustomed to seeing there. The four ranked teams below that I’m taking are all surprises at this point in the season, yet have become some of the most reliable to bet so far. Let’s dive in and take a look.

This should be a very exciting game for the noon window; frankly, it would be a primetime game if both teams didn’t hail from the Sun Belt Conference. The Appalachian State Mountaineers are 6-1 while the Coastal Carolina Chanticleers are 7-0, so this game will almost certainly decide the conference champion (or at least the Eastern division).

While App State deserves a ton of respect and credit for what it’s done so far this season, Coastal deserves even more. This team has made statement win after statement win, and Saturday afternoon should be no different. Expect the undefeated Chanticleers to keep it rolling!

Get a Free NFL Profit Boost every week at PlaySugarHouse.com! Simply sign up, log in every Sunday and receive a 50% Profit Boost to use on the NFL.

The Brigham Young University Cougars have been one of the most electrifying college teams in the country through 11 weeks. The North Alabama Lions are 0-3 and down a combined 76-37 in those games. This is one of those games where you just throw out a humongous number for the spread and see if BYU can actually cover it.

Star QB Zach Wilson should have no problem boosting his Heisman case this week en route to a huge BYU win and cover.

The Cincinnati Bearcats are another team that I just keep taking, without asking any questions. This team is incredibly talented on both sides of the ball and continues to show it on a weekly basis. This week, however, should be one of their biggest tests of the season. They’re visiting a team this week whose offense is currently averaging 610 yards per game.

The University of Central Florida Knights know how to move the ball and move it fast, which should pose an extremely exciting matchup against a very strong Bearcats defense. Cincinnati can move the ball too, and the combo of strong offense and defense should be enough to get the job done on the road.

Bet $50 In-Play on the NFL and get $20 free at BetMGM.com. Keep the action going all four quarters with live wagering. You’ll earn a $20 in-play bet when you place a $50 in-play bet on any NFL game.

This should be another tough conference matchup with long-term ramifications. The San Jose State Spartans come up against the Fresno State Bulldogs 4-0 against a team that hasn’t lost since its opening week hiccup against the Hawaii Rainbow Warriors.

San Jose’s offense relies heavily on the pass game and will find themselves facing a defense that specializes in defending the air attack. Fresno’s offense also looks able to outduel San Jose’s. This should be a nice win for the Bulldogs to (hopefully) pull into a tie for first in the Mountain West.

Why are the Liberty University Flames underdogs? The 8-0 Flames head into Raleigh this week to take on the 5-3 NC State Wolfpack in what must be an ACC-biased spread. Liberty has been dominating teams from every conference all year long, and look to continue doing so against a team that’s dropped two of its last three.

Liberty has a comfortably positive margin in both points and yards per game this year, while NC State is in the negative in both categories. The Flames’ balanced approach on both sides of the ball should help them prevail over an inconsistent Wolfpack side this Saturday night.

There are tons of great matchups all weekend long so keep your eyes peeled! And don’t forget about some of those MAC games early in the week that are always very bet-friendly. Have fun this weekend and good luck!

Do you love betting on sports? Register your account at WilliamHill.com, and you’ll be awarded a Free Bet of up to $500. New players only.