HomeThe ShuffleNCAAF: Which Teams Will Make the Final Four?

NCAAF: Which Teams Will Make the Final Four? 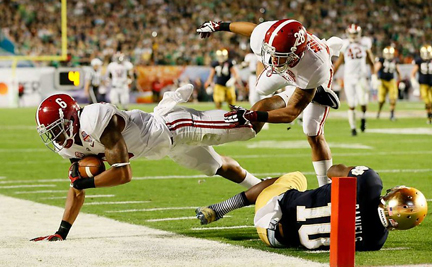 Only four NCAA teams will vie for the championship in January. Let’s see which college football teams are hot, which ones have to try harder, and how the schedules factor into the Final Four.

Only four finalists will make the NCAA football championship. These contenders, stacked against each other in the final regular-season weekend, provide a glimpse of who belongs in the championship games coming January 1 and January 11.

The top-ranked Alabama Crimson Tide and second-ranked Notre Dame Fighting Irish are practically guaranteed a Final Four berth. Alabama will play the sixth-ranked Florida Gators and Notre Dame will face off with the third-ranked Clemson Tigers. Given the strength of the schedule, neither team would presumably drop far with a loss. Only a blowout loss for Clemson—maybe 20 points— would threaten the Tigers, but Alabama and Notre Dame are considered post-season locks.

Alabama is not only unbeaten, but is playing Florida, which just suffered an unexpected loss to the LSU Fighting Tigers. The Crimson Tide opened as a colossal favorite of 16.5 throughout major sportsbooks against the Gators.

A win over Clemson would move Notre Dame to 11-0 for the second time in three seasons, the third time under coach Brian Kelly, and the fifth time in the history of the Fighting Irish program.

Clemson boasts five-star freshman defensive lineman Myles Murphy, who’s tied for the team lead in sacks, with three and a half, and tackles for loss, nine and a half.

Hey, sports bettors! Sign up to wager at GoldenNuggetCasino.com. If your first bet wins, you win! If you lose, get your money back as a Free Bet. Only straight wagers and live in-play bets qualify.

The Tigers also have history. They reached the national finals game last season, losing to the Joe Burrow-led LSU Tigers. Yes, it was an all-Tigers final. 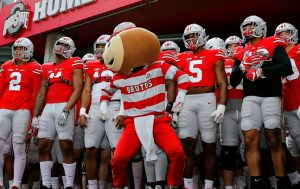 The fourth-ranked Ohio State Buckeyes, scheduled to play the Northwestern Wildcats, has been handcuffed by the pandemic. Several of their games have been cancelled. The Buckeyes have a 5-0 record, playing half the games of some teams, but are widely considered good enough to reach the Final Four. If Ohio State gets there and goes on to win the championship games, it would be the first team to win the national title with fewer than 10 wins since Notre Dame and the Michigan State Spartans shared the crown in 1966.

The fifth-ranked Texas A&M Aggies need to win, presumably if Ohio State is unable to notch victory No. 6 due to postponents or a loss to Northwestern.

One issue for A&M is the lack of victories against opponents with a winning record. The Aggies have just two, against Florida and the Auburn Tigers. This is harmful in a tie-breaking scenario, when a teams’ strength of schedule is weighed.

Regardless of the final standings, this weekend’s games will be compelling for bettors.

Get a free $5 game and a deposit match up to $50 on signup at MonkeyKnifeFight.com. This is Daily Fantasy Football for the rest of us! Make your picks and go!

Who Are the Teams to