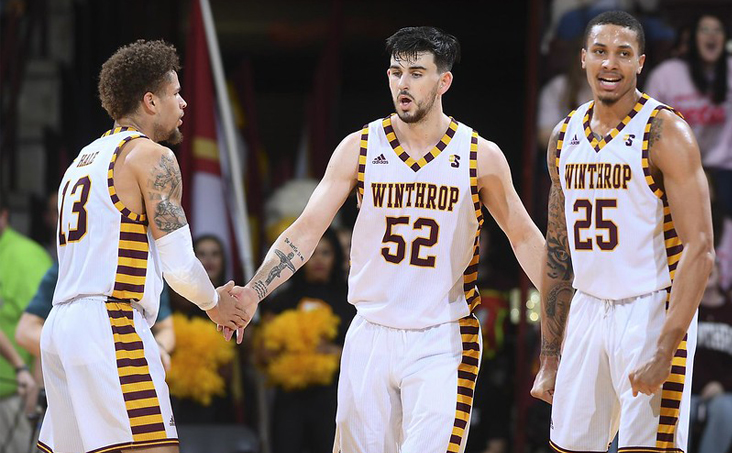 In the 2020-21 basketball season, a couple of NCAAM sleeper teams from small conferences could make a run at the tournament. Here are the teams to watch heading into March Madness.

In the 2020-21 basketball season, a couple of NCAAM sleeper teams from small conferences could make a run at the tournament. Here are the teams to watch heading into March Madness.

So far this season, a lot of NCAA games were postponed, and a lot of players have missed time due to Covid-19. So it’s a little harder to tell which teams will compete come March. This is especially true for “mid-majors,” or non-Power Five conference teams.

While everyone oohs and ahhs over the Gonzagas and Baylors of the world, there are multiple Elite 8 teams in these small conferences flying way under the radar. Let’s take a look at some of the candidates.

The Winthrop Eagles 15-0 (12-0 Big South) haven’t lost in 20 games, but they rely very heavily on star guard Chandler Vaudrin, who leads the team in minutes (almost 10 a game), as well as points, assists, rebounds and steals. The Eagles pass and rebound well, which helped them win 20 straight, and could help them win when it matters in March. They shoot the 3 well, but not at the high rate you’d like to see from a smaller, less physically gifted team.

Winthrop looks very likely to finish the season undefeated and perhaps win a game or two in the tournament.

Bet in-play hoops and get a bonus at WilliamHill.com. Just place a straight wager of at least $10 on any NBA basketball game. If you win, you’ll earn a free bet up to 25% of your net winnings!

The UAB Blazers 12-2 (5-1 Conference USA) run an interesting rotation. In every game, their top seven guys all get pretty equal playing time. This is a unique style, and a valid one, as Coach Andy Kennedy gets solid contributions from all seven on a regular basis. The Blazers rebound well, and are active on the defensive end, getting steals and deflections. This defensive style could translate well in tournament play.

The Blazers’ poor 3-point shooting could affect their ability to reach the tournament, but if they get there, they could make some noise.

(Ready to learn more about betting on the current NCAA men’s basketball season? Click here for tips from William Hill.)

The Wright State Raiders’ 11-4 (9-3 Horizon League) record isn’t as impressive as some others on this list, but this team might be the most qualified to make a deep tournament run. Sure, the Raiders have been a little inconsistent. But their losses are far less important than their wins. They dropped their first game of the season and three close conference games. Most of their victories have been blowouts, as this team covers spreads effortlessly.

The Raiders shoot well from the 3, while also rebounding and protecting the rim well. They seem very well-rounded, and able to fire on all cylinders at any moment. Hopefully the Raiders win the Horizon League and earn a bid to the tournament. They have “dark horse” written all over them.

(BTW—What makes the Gonzaga Bulldogs so hot? To find out, click here.)

The Drake Bulldogs 13-0 (4-0 Missouri Valley) are a confusing bunch. They don’t do anything exceptionally well, yet they haven’t lost a game all year. They don’t really score, pass or defend particularly well, but they do shoot the 3 at a solid rate. They also control most games by dominating in the rebounding category. The Bulldogs are full of high-IQ guys who play well together. While this translates to an undefeated start to the regular season, it won’t translate to an undefeated tournament run. Sorry, but I don’t see it with Drake this year.

(For early insights on the 2020-21 NCAA basketball season, click here).

The Belmont Bruins 16-1 (10-0 Ohio Valley) dropped their fourth game of the season, and took the loss personally. Since then, they’ve won every game, and almost all by double digits. The Bruins score, pass and rebound well, and also fill the passing lanes on defense.

This is probably the most well-rounded team on our list, and if they keep this momentum rolling into March, I wouldn’t want my team to get matched up with them. The Bruins could be an Elite 8 team, if they’re hot at the right time.

As the current season unfolds, don’t overlook these NCAAM sleeper teams from small conferences. Under the right conditions, one of these teams could make a run at the tournament.

All five have been winning and covering spreads, so don’t be shy to jump on a few. As a general tip, lately first-half unders in these college games have had a very high success rate. Check them out, and good luck!

Can Buffalo Bills Be