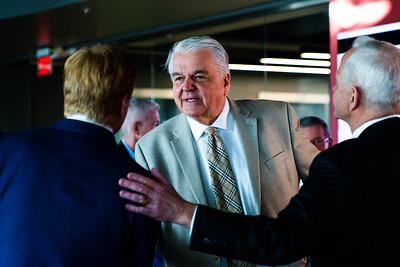 The first phase of Nevada’s return to limited normalcy is under way. But the gaming industry isn’t part of that yet, and it doesn’t appear that Governor Steve Sisolak (l.) will give the OK to resume before the end of the month, and possibly not until sometime in June.

Several of Las Vegas’ major casino operators are getting their reopening plans in order, but it’s still not known when Governor Steve Sisolak will clear gaming in Nevada to resume business.

It appears the casinos will fall into what’s designated as Phase 4 of the state’s reopening schedule, which means they could remain closed until the end of this month and possibly until June. Sisolak’s OK of Phase 2 has yet to occur, as has his definitions of what could open in each phase.

Phase 1 commenced Mother’s Day weekend after the governor said the state “met our gateway benchmarks” for a resumption of business, including a declining percentage of positive Covid-19 tests, a decrease in virus-related hospitalizations and ramped-up capacity for testing and handling a possible surge in hospitalizations.

As such, those business that are reopening under Phase 1 are doing so under strict state-mandated capacity limits and a number of health and safety requirements that include mandatory face coverings for all employees that interact with the public.

Those reopening include dine-in restaurants, retail stores, open air malls and marijuana dispensaries. Barbershops and hair and nail salons can accept customers but by appointment only.

Gatherings of more than 10 people remain banned, along with visits to senior living facilities and all non-essential travel.

“I don’t have a specific metric to move into Phase 2,” Sisolak said. “It’ll depend on various variables and criteria that would happen, benchmarks along the way. And we’ll play it by ear.”

Wynn Resorts said it doesn’t expect the green light until at least the end of this month, but it will be looking to simultaneously restart both its Strip casino hotels, Wynn Las Vegas and Encore, when that day comes.

“Clearly, we won’t be opening large mass-gathering places—nightclubs or convention areas or shows,” CEO Matt Maddox said. “But we will be opening most of our restaurants, and we’ll be working with our retail partners to try to have an experience that will be safe and fun.”

Company officials said the properties will need an occupancy rate of 50 percent to 60 percent to break even, and Maddox said he’s optimistic they’ll get there.

“We do anticipate that as we get close to an opening, weeks from now, there will be pent-up demand in the leisure segment.”

The company already has publicized a list of health and safety protocols that include social distancing on the gaming floors and in restaurants and other public spaces, personal protective wear for employees and customers, mandatory temperature scans on entry and regular extensive cleaning and sanitizing of all public and back of house areas.

Wynn, which employs about 15,000 people in Las Vegas, said it will pay all salaries and benefit through at least the end of May.

Las Vegas Sands said it won’t reopen its Strip resorts, The Venetian and Palazzo, before June and will continue to pay its furloughed workers until then.

LVS also has released an extensive protocol similar to Wynn’s for ensuring health and safety once it reopens. The company also is paying to test all employees for the coronavirus and its antibodies to see if they had the disease in the past. Testing began earlier this month and is being offered to employees’ immediate households as well.

“Our top priority continues to be the health and safety of our team members and visitors,” the company said in a statement. “We are working hard to be as prepared as possible for the day we welcome our guests.”

The company said business will restart later at the Palms, Texas Station, Fiesta Henderson and Fiesta Rancho pending an assessment of the performance of the first wave.

MGM Resorts International has said it will probably open only a couple of its 10 Strip resorts and has named Bellagio and New York-New York as likely front-runners.