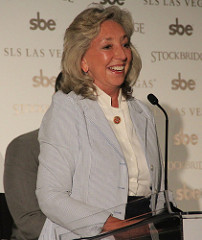 U.S. Congresswoman Dina Titus, who represents Las Vegas, has penned a letter to Deputy Attorney General Rod Rosenstein, urging the Justice Department not to reverse a ruling it made in 2011 that allowed online gambling in individual states.

There have been no recent indications that the DOJ is about to make a new ruling, but an aide to Titus told ABC News that numerous gambling companies have expressed concern to her office about a possible reversal of the Justice Department ruling.

In 2011, the Department of Justice issued a ruling that online gambling within states borders would not violate the country’s Wire Act. Three states—Nevada, New Jersey, and Delaware—quickly legalized online gambling. Pennsylvania has recently approved online gaming, but no sites have begun operating in that state.

“In Las Vegas, we have seen that a regulated market is always better than an illegal one,” Titus wrote. “Internet gambling will not go away with a reversal of Wire Act guidance; it will merely push more consumers into black markets.”

A Justice Department spokesman declined to comment on Titus’s letter, and would not say whether the department is considering changes to its stance regarding internet gambling, ABC News reported.