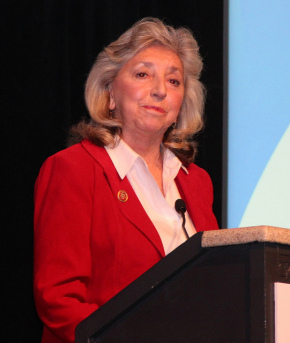 Nevada Congresswoman Dina Titus has sent a letter to Vice President-elect Mike Pence urging him and the incoming Trump administration to oppose a ban on online gambling in the U.S.

Her letter comes after 10 state attorneys general sent a letter to Pence—who heads Donald Trump’s transition team—to supports the Restore America’s Wire Act, which would ban online casino gambling in the U.S. including in states such as Nevada that already allow online gambling. The letter was signed by Nevada’s Attorney General, Adam Laxalt, despite Nevada’s current online gambling laws.

“The letter submitted by the attorneys general contains several inaccuracies and unfair allegations,” Titus says in the letter according to Fox News.

Titus said online gaming regulations in Nevada prove the practice can be regulated.

“Gaming regulation in the state of Nevada is considered the international gold standard,” she said.

RAWA seeks to reinforce the federal Wire Act of 1961 and make online gambling illegal in the U.S. with exceptions for fantasy sports and horse racing. The bill is strongly backed by Las Vegas Sands owner Sheldon Adelson and has been supported by several GOP lawmakers including Lindsay Graham and Marco Rubio.

Meanwhile, Pennsylvania Congressman Michael Fitzpatrick has also introduced a new bill in the House seeking to ban online gambling. The bill is similar to RAWA in that it cites a 2011 judgment by the Department of Justice that the original wire act did not address online gaming as inaccurate.

Pennsylvania is one of several states that have been considering legalizing online poker.

There has been a lot of speculation on how the incoming administration will view the attempts to ban online gambling. While President-elect Donald Trump is a former casino owner and has said in the past he supports online gambling, Pence has been opposed to online gambling. There is also renewed worrying that supporters may try to push the bill through in the lame duck session of congress.

Titus warned that there could be ramifications from banning online gambling from states that are already properly regulating the practice.

“I encourage you to carefully study this issue before making any decisions that would infringe on state’s rights or eliminate jobs in the gaming industry,” she said.

New Jersey and Delaware also allow online gambling and several states such as California and Pennsylvania have been studying possible legislation.