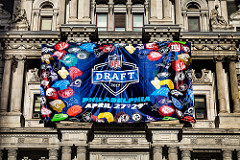 The Nevada Gaming Control Board has approved the state’s sports books to take bets on the National Football League draft to be held in Philadelphia later this month.

With Las Vegas now the official new address of the Oakland Raiders, and the gambling mecca and the league clearly drawing closer and closer, the Control Board decided it was appropriate to reverse its longstanding ban on betting on off-season events like the draft―a practice heavily marketed by unlicensed online bookmakers but prohibited to the state’s land-based layers.

The betting will, however, be conducted a little differently than traditional game bets.

“It has to be something that makes us comfortable from a regulatory standpoint,” said Control Board Chairman A.G. Burnett. “Most importantly, that the outcome of the event can’t be affected by a bet that is placed.”

Draft wagers will be accepted until the close of sports book business on Wednesday, April 26, the day before the draft kicks off.

Meanwhile, critics of the NFL’s hypocritical stance on gambling were blasting the league after it was announced last week that more than 30 NFL players likely will be fined after participating in the promotional Pro Football Arm Wrestling Championship at the MGM Grand on the Las Vegas Strip.

NFL policy does not prohibit players from gambling in casinos on their own time. However, there is a longstanding policy in place that players and league personnel are banned from “making promotional appearances at casinos or other gambling-related establishments.”