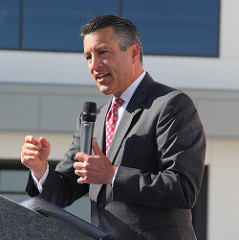 Nevada Governor Brian Sandoval is bringing together a blue-ribbon panel of public- and private sector leaders across the state to study how to bring major sporting events like the NFL draft to Las Vegas.

The Southern Nevada Sporting Event Committee, whose members include Clark County Commission Chairman Steve Sisolak, Las Vegas Mayor Carolyn Goodman, Las Vegas Convention and Visitors Authority CEO Rossi Ralenkotter, along with representatives of the Nevada Resort Association and the state’s pro sports teams, will begin meeting in July and report on its findings by the end of the year.

Sandoval will chair the panel and the Governor’s Office of Economic Development will provide administrative support.

The committee will look at annual events hosted by professional and amateur sports leagues, the availability of arenas, stadiums and other large venues and transportation, among other issues. It will recommend improvements to accommodate major sporting event and also consider whether the state Legislature should create a permanent sports committee.

Now that Las Vegas is home to several professional sports teams, “Additional opportunities to attract major sporting events and associated activities to our state are arising, especially with the addition of the new stadium,” Sandoval said.

The NFL’s Oakland Raiders, who are building a $1.8 billion stadium behind the Las Vegas Strip, are scheduled to start playing there in 2020. The city also is home to the Golden Knights of the National Hockey League, the WNBA Aces basketball team, the Lights soccer team and the 51s minor league baseball team.

Las Vegas is one of five finalists to host the NFL draft in 2019 or 2020. The league is expected to make its selection at meetings in May.