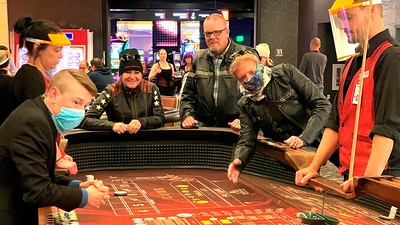 Nevada is now requiring players at casino table games to wear face masks. The move is in response to customers who are ignoring safety guidelines in large numbers as they pour into the state’s recently reopened casinos.

Mounting health and safety concerns has prompted the Nevada Gaming Control Board to toughen its casino reopening policies. Last week, the body made it mandatory for table games players to wear masks or face coverings unless dealers are shielded from them by partitions or other barriers.

The new requirement “applies to table and card game players, spectators and any other person within six feet of any table or card game,” the order stated.

The change, announced June 17, comes amid a sharp increase in Covid-19 infections across Southern Nevada since businesses and public attractions began reopening in May after a two-month state-imposed lockdown.

These include the first confirmed case of the virus in Las Vegas involving a casino employee—a kitchen worker at Bellagio’s Mayfair Supper Club—since the industry reopened June 4. The restaurant closed last Wednesday. It was not known last week when it would reopen.

Nevada’s casinos reopened with face masks mandatory for employees but only recommended for customers. It’s been widely reported that few are wearing them or adhering to prescribed social distancing guidelines.

As of last week, more than 600 complaints had poured into state agencies about businesses flouting a host of state-mandated rules designed to stem the spread of the respiratory disease, including allowing gatherings of people in the hundreds (no more than 50 are allowed) and failing to provide employees with masks.

“I think because of some of the reopenings that have happened and the relaxation of some of the requirements, some people may have a sense of complacency,” said Mike Johnson, a physician with the Southern Nevada Health District.

“Everybody and anybody right now thinks they should be open,” Clark County Commission Chair Marilyn Kirkpatrick said. “Everybody thinks that they don’t have to follow the rules.”

Compounding the danger is the fact that Nevada, unlike gaming jurisdictions elsewhere in the country, does not require casinos to gather personal information from customers, making it impossible to conduct contact tracing.

What is known is that on June 16, Clark County reported the largest single-day increase in new cases seen in Nevada𑁋342𑁋since the state began testing in March. This was after a previous high of 242 announced June 13.

June 16 marked the county’s highest seven-day average of new cases 194 which also came with 13 new hospitalizations. It was also one of the biggest days of testing in the county. About 5,600 tests were administered, according to state data.

The county last week also reported the first death of a minor from the virus, bringing the total number of fatalities as of Wednesday to 473 statewide; 386 have occurred in Clark County.

Total confirmed cases in the state as of Wednesday stood at 11,852, far fewer than states like Florida, Texas and Arizona, which were among the first to reopen their economies and, having mandated little or no restrictions or safety precautions, have seen record increases in recent days in new infections and hospitalizations.